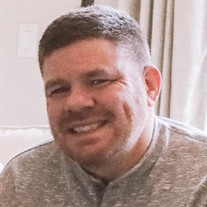 Zach Shoemaker, of Arlington, Tennessee, formerly of Broken Arrow, passed away Sunday, March 22, 2020 at the age of 42. Private family services will be held with burial following at Park Grove Cemetery. Friends may visit Zach at the funeral home Wednesday, April 1 from 11 AM-5 PM. Zach was born Wednesday, August 17, 1977 in Lawton, Oklahoma to Gary Shoemaker and wife Mary (Cavender). Zach grew up in Broken Arrow, Oklahoma, graduating from Broken Arrow High School in 1996. Zach played football, wrestled, and was active in Boy Scouts, achieving the rank of Eagle Scout. After high school, Zach graduated from Northeastern Oklahoma A&M, Northeastern State University, and Southern Illinois University, earning numerous degrees to include a Master’s degree in Behavior Analysis. Following his graduation from Southern Illinois, Zach became a Certified Behavior Analysis, one of his proudest achievements. Zach worked for many years in and around the Memphis, Tennessee, area as a behavior analyst providing care for those with mental and behavioral disabilities. Zach had a loving heart and a true calling as a servant. Over the years, Zach taught Sunday School and ministered to those incarcerated in prison. He also volunteered countless hours in support of the Way of the Cross Ministries in Nicaragua and the Friends of Faith Ministry in Bartlett, Tennessee, a ministry in service to adults with special needs. On April 28, 2001 Zach married the love of his life, Ginger (Thomas) in Broken Arrow and their union was blessed with 3 children; sons Tyler and Sawyer, and daughter Gracie. He enjoyed all forms of wrestling, was an avid OU Sooner football fan and loved spending time with his family. Zach is survived by: Wife Ginger Shoemaker of the home Sons Tyler Shoemaker of the home Sawyer Shoemaker of the home Daughter Gracie Shoemaker of the home Mother Mary Shoemaker of Broken Arrow Brother Aaron Shoemaker of Alexandria, Virginia Sister Rachel Shoemaker of Bixby Zach is predeceased by: Father Gary Shoemaker The family has asked that in lieu of flowers, donations be made to: http://paypal.me/shoemakermemorial

Zach Shoemaker, of Arlington, Tennessee, formerly of Broken Arrow, passed away Sunday, March 22, 2020 at the age of 42. Private family services will be held with burial following at Park Grove Cemetery. Friends may visit Zach at the funeral... View Obituary & Service Information

Send flowers to the Shoemaker family.