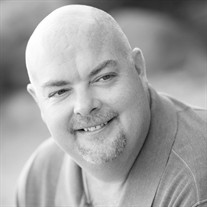 William Zachary McNeill Capps, age 43, of Tulsa, Oklahoma was promoted to heaven on Tuesday, April 5, 2022. Zac was born Friday, May 26, 1978 in Little Rock, Arkansas to Kit McNeill and Beverly Capps. During his early years, he lived in Arkansas where he enjoyed spending time with his grandparents, Charles and Peggy Capps and becoming acquainted with their ministry. Wanting to imitate his grandpa, he began to preach at the age of 3. This was particularly baffling to the family since this would usually take place in restaurants full of people who did not expect to see a child standing in his chair yelling “Repent! Jesus is coming!” All sets of grandparents and great grandparents influenced his life immensely and his fondest childhood memories were of his family in Arkansas. In addition to working for his grandparents ministry, Zac also traveled and set up campaigns for missionaries in Africa, India, and the Philippines. On July 21, 2007, Zac married the love of his life, Erin Mathews in Lakeport California. Zac and Erin built a life in Tulsa where Zac followed his inclinations into real estate. Real estate was his business, but following sports was a joy for him as he and Erin avidly followed his beloved OU. His friends knew him as loyal, giving, and willing to go to any length to help them. Zac and Erin greatly enjoyed traveling together to scenic places and spending time with friends. Zac was a devoted “dog daddy” to their furry canine children, Nina, Baker, and Murray. Those left to cherish his memory are his wife, Erin Capps, his mother, Beverly Capps and grandmother Peggy Capps both of Broken Arrow, Oklahoma, and his father, William Burgess (his wife Shirley) of Nuevo, California. Also surviving are his siblings BreAnne Brue (her husband Zachary Brue, niece Katelyn Brue, nephew, Corwin Brue), Caleb Burgess, Daniel Burgess, Beau Burgess, and EireAnne Burgess. Zac is predeceased by his father, Kit McNeill and grandfather, Charles Capps. A funeral service honoring his life will be held at 2 pm, Tuesday, April 12 at Hayhurst Funeral Home. Burial will be at Mulberry Cemetery in England, Arkansas on Thursday, April 14 at 1:00 pm. The family requests that memorials may be made in lieu of flowers to John 3:16 Mission in Tulsa, OK. (john316mission.org)

William Zachary McNeill Capps, age 43, of Tulsa, Oklahoma was promoted to heaven on Tuesday, April 5, 2022. Zac was born Friday, May 26, 1978 in Little Rock, Arkansas to Kit McNeill and Beverly Capps. During his early years, he lived in Arkansas... View Obituary & Service Information

Send flowers to the Capps family.