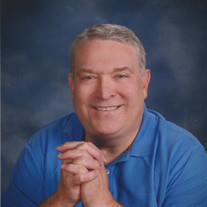 William “Bill” James Bly was born on March 10, 1951 in Elmira, New York, the son of Lloyd and Louise (Heinzman) Bly. He died, in peace, at his home in Broken Arrow, Oklahoma on Friday, August 14, 2020. He was 69 years of age and of English and German ancestry. Bill grew up in Geneseo, upstate New York. He received a Bachelor of Arts degree from SUNY Geneseo in 1973 and continued his education, receiving a Masters Degree in Creative Writing from SUNY Buffalo in 1978. Soon after he moved to Broken Arrow, OK and married the former Miss Jo Ann Comstock from 1980 -1995. They had a daughter named Elizabeth Theresa Ann Bly born in 1992. Bill worked for Dr. Pepper Co and then became a pharmaceutical sales representative until 2007. During retirement he enjoyed traveling with his daughter and collecting art. Throughout life he had many hobbies and enjoyed Painting, Writing, Poetry, Reading, History, Genealogy, and Collecting Autographs. He was a member of the Church of St. Benedict since 1980 where he had been a Lector, Eucharistic Minister and Religious Education Teacher. The family requests memorials to the Church of St. Benedict, 2200 West Ithica, Broken Arrow, Oklahoma 74012. He is survived by, Daughter, Elizabeth Bly and her Mother Jo Ann Bly Broken Arrow, OK Brothers, Lloyd Jr. and Kathie Bly, Dallas, TX Rick and LaFonda Bly, Claremore, OK Bill was preceded in death by his parents, Lloyd and Louise.

The family of William "Bill" Bly created this Life Tributes page to make it easy to share your memories.

Send flowers to the Bly family.