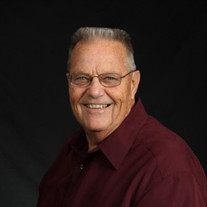 Walt's service will be streamed live at https://youtu.be/9g_5Z2-NStc

Send flowers to the Walters family.