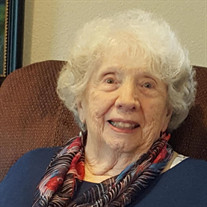 Virginia Rose Herout was born in Beemer, Nebraska, to Edward and Rose Nebuda on September 13, 1923, and left this earthly life peacefully in her home on April 1, 2022. She grew up in Beemer and graduated from high school in West Point, Nebraska. After graduation she studied hair dressing, a career she enjoyed for many years. She also loved music and to dance. In 1946 she met her husband, Laddie, a recently discharged army veteran, at a dance in Howells, and they were married on July 3 that year after a brief courtship. Together they worked hard, making a living and raising four children. In the 1960s they got into the motel business, first in Sidney, Nebraska, and later in Muskogee, Oklahoma, where they owned and operated the Sooner Motel. After leaving the motel business, they moved to the Tulsa area and retired in Broken Arrow. Life was not always kind, however. In the 1980s Laddie suffered a debilitating stroke and shortly after their youngest son, Todd, died. They were people of faith, though, and their faith was their strength. Virginia took care of Laddie for ten years until he was called home to heaven. After that she was blessed with twenty-three more years on this earth. During those years she was able to devote time to her two passions: studying the Bible and painting. She led the Tuesday morning Bible study at her church for many years, only giving up the leadership role at age ninety. She also studied and practiced oil painting, becoming an accomplished painter. She stayed interested in current affairs and politics and she enjoyed watching college football and cooking shows. Late in life she became a big fan of the St. Louis Cardinals and was eagerly awaiting opening day. Virginia was preceded in death by her husband, Laddie, and son, Todd, and two sisters, Jo Ann Buche of Iola, Kansas, and Sue Wagner of Grapevine, Texas. She is survived by her children, Wayne (Patsy) Herout of Watauga, Texas; Charlene (Jerry) Jerman of Norman, Oklahoma; and Clayton Herout of Hulbert, Oklahoma. She was blessed with four grandchildren, Soni Jo (JB) Brown of Broken Arrow; Emily (Neal) Schuster of Norman; Hadley Jerman of Norman; and Andrew Jerman of Norman. Her great-grandchildren include Caleb, Elizabeth, and Ashley Brown of Broken Arrow; and the two newest additions to the family, “the babies” as she called them, Anne and Frederick Schuster. She is also survived by many nieces and nephews, to most of whom she is affectionately known as “Aunt Babe.” Virginia adored and championed her family, and she enjoyed the company of many friends, especially the ladies of the Bible study and a few loving neighbors. She lived a full and faithful life and she will be greatly missed. The family would like to thank Pastor John Wilke for his visits to Virginia when she could no longer make it to church, and Pastor Art Spomer and wife Connie for their years of love and spiritual support. Virginia was also blessed by loving caregivers, especially nurses Catherine and Johanna, aide Lauren, and those ladies who spent the most time with her in her final years: Valerie, Rosemary, and Cyndi. In addition, we thank Marissa, Alexis, and Amber for bringing their cheerful young faces into the home. In lieu of flowers the family suggests memorial gifts be made to Virginia’s church, Immanuel Lutheran Church of Broken Arrow, or the charity of your choice

Virginia Rose Herout was born in Beemer, Nebraska, to Edward and Rose Nebuda on September 13, 1923, and left this earthly life peacefully in her home on April 1, 2022. She grew up in Beemer and graduated from high school in West Point, Nebraska.... View Obituary & Service Information

The family of Virginia Herout created this Life Tributes page to make it easy to share your memories.

Virginia Rose Herout was born in Beemer, Nebraska, to Edward...

Send flowers to the Herout family.