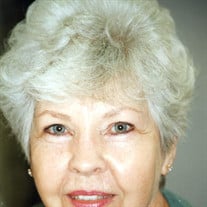 Virginia was born in Tulsa, Oklahoma on Monday, January 18, 1932 one of six children, including a twin sister, to Andrew and Belva (Bower) Collins. She passed from this life on Tuesday, September 29, 2020 in Tulsa. Virginia was close to all her siblings, but she shared a special bond with her twin sister, Carolyn. They had so much fun fooling a lot of people as they were growing up, especially teachers at school. Even as adults, they met every Saturday to go shopping together until Carolyn’s death. Virginia graduated from Will Rogers High School in Tulsa in 1950 and she and Anton Frank Behles married that same year on December 26. The Behles had two sons and two daughters of their own. She was absolutely the best mom the kids could have had. She was feisty and fun and never missed a ball game or school event that they were involved in. Virginia’s mother was a great cook and passed those skills on to her daughter. She began hosting a family dinner every week on Sundays. Everything was made with love from scratch and the kids and grandkids especially loved her homemade rolls and desserts. Birthday lunches were extra special as the family member was able to choose their favorite meal and dessert. Virginia encountered a lot of loss in her life but was a strong presence and rock to her family. She will be missed by all who loved her and was loved by her. She is survived by: Daughter, Susan Walters of Broken Arrow Son, Timothy Behles and his wife, Kathy of Broken Arrow Sisters, Jean Dark of Broken Arrow and Betty Sue Miller of Skiatook 7 Grandchildren, Lisa Tower, John Behles, Jeff Behles, Jason Walters, Natalie Hartman, Brent Behles and Rachel Behles 11 Great-grandchildren And her special friend of 15 years, Chuck Walker She was preceded in death by her parents, Andrew and Belva Collins; her husband of 50 years, Frank Behles; twin sister, Carolyn Lacy; Brothers, Paul Collins and Lonnie Collins; one son, Stephen Behles and one daughter, Elizabeth Ann Behles

Virginia was born in Tulsa, Oklahoma on Monday, January 18, 1932 one of six children, including a twin sister, to Andrew and Belva (Bower) Collins. She passed from this life on Tuesday, September 29, 2020 in Tulsa. Virginia was close to all... View Obituary & Service Information

The family of Virginia Behles created this Life Tributes page to make it easy to share your memories.

Send flowers to the Behles family.