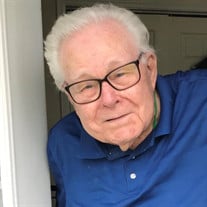 Victor Metcalf was born in Bokchito, Oklahoma on Thursday, August 19, 1926 to Homer Jackson and Maggie (Brooks) Metcalf. He was reunited with his lovely wife, Marjorie, at the pearly gates on Friday, September 18, 2020. His services are under the direction of Hayhurst Funeral Home. Victor had some hardships growing up but he was determined to rise above them! While attending Broken Arrow Schools he met a beautiful young lady named Marjorie Hess. They fell in love and stayed that way. While serving in the United States Marine Corps during World War II, Victor and Marjorie married during a brief furlough on December 30, 1945. While enjoying 72 years of marriage, they raised three children. Victor was fully devoted to serving Jesus by loving his wife and family! He was proud of and appreciated spending time with his family. After retirement from his career with American Airlines, Victor continued being active doing things he enjoyed that involved children. He enjoyed driving the bus for Broken Arrow Public Schools and Small World Learning Center. He was a people person and loved doing customer service satisfaction contacts during a stint with Chalmers Chevrolet. He found enjoyment in remodeling and gardening. He loved to read, especially his Bible. He loved to travel with Marjorie and family and visited many beautiful sites during his time with American Airlines. Victor never met a stranger. He lived out his Christian walk, witnessing and continually praying for everyone he came in contact with. He is survived by, Son, Ron Metcalf and wife, Jennifer of Broken Arrow, Oklahoma Daughter, Brenda Hall and husband, Larry of Broken Arrow, Oklahoma Son, Larry Metcalf and wife, Debbie of Broken Arrow, Oklahoma Grandchildren, Heather Hall and TJ, Heidi Hill and Heath, Jerrad Hall and Diana, Travis Hall and Rachael, Brian Metcalf and Donna, Jason Metcalf, eleven great grandchildren and one great-great-grandson He was preceded in death by his wife, Marjorie, parents and sister, Jackie Brown Services have been rescheduled to a later date yet to be determined.

Victor Metcalf was born in Bokchito, Oklahoma on Thursday, August 19, 1926 to Homer Jackson and Maggie (Brooks) Metcalf. He was reunited with his lovely wife, Marjorie, at the pearly gates on Friday, September 18, 2020. His services are under... View Obituary & Service Information

Victor Metcalf was born in Bokchito, Oklahoma on Thursday, August...

Send flowers to the Metcalf family.