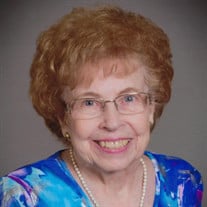 Verla June Worley, passed away, September 17, 2021, in Broken Arrow, Oklahoma at the age of 86. A memorial service will be held on Saturday, October 2, 2021, at 10:30 am at the Braman United Methodist Church with Daniel Gibbens Rickman officiating. Verla was born, March 21, 1935, in Caldwell, Kansas to Verl Albert Glaser and F. Margaret (Jacobson) Glaser. She attended school in Caldwell, Kansas before moving to Braman, Oklahoma where she graduated from Braman High School in 1953. She attended Northern Oklahoma Junior College in Tonkawa before marrying Elvin Lee Worley on August 27, 1954. Verla and Elvin made their home in Braman, Oklahoma. Verla worked for the Ed Johnston Grain Company before moving to the family farm and working alongside Elvin and raising a family. She was an active member of the Braman United Methodist Church where she taught children’s Sunday School, served as lay delegate to Annual Conference, and participated in various committees. She spent later years working for Kelle Oil Company until she retired. Verla loved the Braman community and loved participating in the school and community events. She enjoyed spending time with family, friends, and grandchildren in whatever they were doing. She loved the Lord and sharing her faith, she also served as an officer and member of the Women’s Aglow Fellowship in Wellington, Kansas, and Blackwell, Oklahoma. After relocating to Tulsa to be closer to treatment for Elvin and closer to family, she joined St James United Methodist Church; participated in Bible studies and activities in her church and retirement community. She is survived by her daughter, LeAnn Covalt of Broken Arrow, OK.; sons, Doug Worley and his wife, Lynn of Tulsa, OK., Brian Worley, and his wife Christy, of Broken Arrow, OK.; grandsons, Will Covalt of Arlington, TX, Sam Worley, Blake Worley both of Tulsa, OK.; grandsons, Austin, Davis, and Tate Worley all of Broken Arrow, OK.; and granddaughter Molly Worley of Tulsa, OK. She is also survived by her sister Margaret Mitchell of Broken Arrow, OK.; and brothers, Graeme Glaser of Peabody, Kansas, Dennis Glaser and his wife Vicki of Kimberling City, MO, and Jon Glaser of Rosehill, KS. Verla was preceded in death by her infant daughter Colleen Denise, her parents, her husband, and son-in-law Stan Covalt. Memorial contributions may be made to Braman United Methodist Church or Braman Fire Department sent in care of Hayhurst Funeral Home, 1660 S Elm Place, Broken Arrow, OK. 74012.

Verla June Worley, passed away, September 17, 2021, in Broken Arrow, Oklahoma at the age of 86. A memorial service will be held on Saturday, October 2, 2021, at 10:30 am at the Braman United Methodist Church with Daniel Gibbens Rickman officiating.... View Obituary & Service Information

The family of Verla Worley created this Life Tributes page to make it easy to share your memories.

Send flowers to the Worley family.