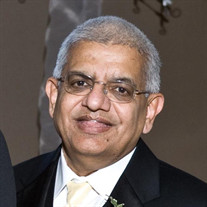 Venkatesan “Prab” Prabhu was born to Ananthalaxmi and K. Venkatesan on December 29, 1945 in Bangalore, India. He passed from this life on September 16, 2020 in Tulsa, Oklahoma. Prab grew up in Bangalore, India with his parents, his sisters; Leela and Vasantha, and his brother Sridhar. He left India around the age of 17 years, and completed post graduate degrees from Cranfield University in Bedford, England. After his studies, he came to the United States and continued his career in the Flight Simulation Industry. In 1992, Prab founded Impex, Inc. where he continued to work and thrive for the past 28 years. Susan and Prab were married in 1982, and they were blessed with Christopher and Kendall. Nothing could equal the love and pride he had in them, and he cherished every minute spent with them throughout their lives. In 2018, Prab became “Tata” to Cooper Prabhu Schlipf – the love they shared was Prab’s ultimate joy. Andy Warhol said, “The idea is not to live forever, but to create something that will.” Prab’s legacy lives on not just in his family, but with all those he encountered in his life. Please toast with your loved ones to the man who never met a stranger and always said, “one drink only with an enemy, and two drinks with a friend.” In lieu of flowers, memorials may be made to the American Cancer Society. Prab is survived by, His wife, Susan, of the home Son, Christopher, of Oakland, California Daughter, Kendall, and her husband Owen, of Tulsa Grandson, Cooper and one on the way (Carter) Sister, Vasantha Rangaswamy of Bangalore, India Brother, K.V. Sridhar of Bangalore, India And numerous aunts, uncles, nieces, nephews, cousins and friends He was preceded in death by his parents, Ananthalazmi and K. Venkatesan; and his eldest sister, Leela

Venkatesan &#8220;Prab&#8221; Prabhu was born to Ananthalaxmi and K. Venkatesan on December 29, 1945 in Bangalore, India. He passed from this life on September 16, 2020 in Tulsa, Oklahoma. Prab grew up in Bangalore, India with his parents,... View Obituary & Service Information

The family of Venkatesan Prabhu created this Life Tributes page to make it easy to share your memories.

Venkatesan “Prab” Prabhu was born to Ananthalaxmi and K. Venkatesan...

Send flowers to the Prabhu family.