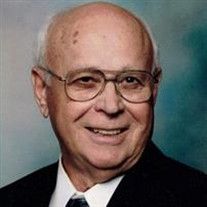 Vernon Kenneth Neal was born and raised in a small farmhouse outside of Wanette, Oklahoma on Friday February 28, 1930, the youngest of eight surviving children to James Thomas Neal and Mary Elizabeth Neal. He passed from this life to his eternal home in heaven on Thursday, March 25, 2021 in Broken Arrow, Oklahoma at the age of 91 surrounded by his loving family. Growing up on the farm was difficult and the loss of his mother at 8 years old had a profound impact on Kenneth. As a young boy he accepted Jesus Christ as his Saviour and after finding out the church’s baptistry was broken, with persistence Ken’s baptism was performed at his brothers pond. Kenneth met Helen Maxine Pursifull and they were married on October 8, 1950 in Wanette, Oklahoma. They enjoyed over 70 years of marriage together. In February 1952 Kenneth was working as a lineman for Southwestern Bell in western Oklahoma where he saw an Air Force Recruiting office. He walked in, joined and being told to report within a few days hurried back home to prepare. Kenneth was stationed in Denver Colorado where he specialized in electronics and was a technical instructor for radar training. Discharged in 1956, Kenneth and Helen returned to Oklahoma where he continued his career for Southwestern Bell until his retirement in 1986. This close-knit family describes Kenneth as clever and quick-witted. He ethics and character were always evident. He loved to fish and work with his hands. A loving and caring man he gave of himself to his family and his biggest joy was to have everyone together. Vernon Kenneth Neal was the utmost husband, father, grandpa and friend. He will be missed by all who knew and loved him. Kenneth is survived by: His wife, Helen of Broken Arrow Son, Ken and his wife, Kathy of Tulsa Son, Mark and his wife, Meladee of Broken Arrow Son, John and his wife, Tammy of Claremore 8 Grandchildren: Katie, Stephen, Meghan, Patrick (Kelsey), Chelsie (Chris), Allison (Alex), Ryne (Lauren) and Tyler 8 Great Grandchildren: Hayden, Hailey, Waylan, Jackson, Danielle, Madison, Russell and Abbey along with so many more. He was preceded in death by his parents and his 7 older siblings.

Vernon Kenneth Neal was born and raised in a small farmhouse outside of Wanette, Oklahoma on Friday February 28, 1930, the youngest of eight surviving children to James Thomas Neal and Mary Elizabeth Neal. He passed from this life to his eternal... View Obituary & Service Information

Vernon Kenneth Neal was born and raised in a small farmhouse...

Send flowers to the Neal family.