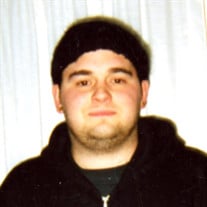 Tony, who became known by Allen was born in Monett, Missouri on Thursday, June 8, 1978, to Tony, Sr., and Connie (Francisco) Wright. He passed away from injuries sustained in an automobile accident on Wednesday, December 1, 2021, in Tulsa, Oklahoma at the age of 43. Allen was the only child of Tony, Sr., and Connie. He spent the first few years of his life in Mount Vernon, Missouri, before the family moved to Springfield, Missouri in 1988. He loved to skateboard as a youth. The family then moved to Broken Arrow, Oklahoma in 2005 to allow Allen to attend Tulsa Community College, where he earned an associate degree in Horticulture in 2008. After that, he went to work for the City of Tulsa in the Parks Department. He worked at Woodward Park, where he oversaw the greenhouse there. He had a “green thumb” and could grow anything, but his favorite thing to grow was orchids from seedlings at the family home and in their sunroom. He had a beloved blue pitbull named Bella. Allen and Bella enjoyed their daily walks together. He also enjoyed restoring a 1966 Volkswagen Double Cab Type 2 Pickup. He will be missed by all who knew and loved him. Left to cherish his memory are his parents, Tony Sr., and Connie of Broken Arrow Paternal Grandparents, James and Betty Wright of Broken Arrow Uncle Terry Wright Uncle Teddy Wright Aunt Tammy Wright, and Joy Uncle Tracy Wright Aunt Vera Mae Gibbons Uncle Dennis Francisco Uncle Jerry Francisco, and Cindy Aunt Deanna Love, and Bill And numerous cousins Those who preceded him in death are his maternal Grandparents, Theodore and Gladys Francisco and an uncle, Theodore Francisco, Jr. A Memorial Service is being planned for Thursday, December 16 at 10:00 AM in the Chapel at Hayhurst Funeral Home followed by a Graveside Service at Park Grove Cemetery in Broken Arrow

Tony, who became known by Allen was born in Monett, Missouri on Thursday, June 8, 1978, to Tony, Sr., and Connie (Francisco) Wright. He passed away from injuries sustained in an automobile accident on Wednesday, December 1, 2021, in Tulsa, Oklahoma... View Obituary & Service Information

Tony, who became known by Allen was born in Monett, Missouri...

Send flowers to the Wright family.