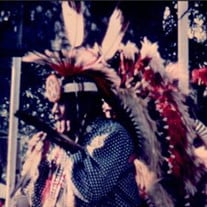 Tommy Chaino Ahkeahbo, Sr. was born on August 14, 1940, to the Rev. John Chaino Ahkeahbo and Lillie Littlchief Chaino Ahkeahbo in Lawton, Oklahoma. He was called home on January 25, 2022, in Tulsa, Oklahoma. Tommy graduated from Kingfisher High School in 1958 where he was a 4-star athlete competing in Baseball, Basketball, Football and Track. He also served as Student Leader of the Democratic Party and served as a page his senior year. Tommy went on to attend the Haskell Institute in Lawrence, Ks and graduated in 1960 with an Associate Degree in Print Press/Journalism. After graduation he worked as an instructor for the Journalism/Printing Department at Haskell Institute until moving back to Oklahoma with his family in 1965. Tommy made his home in Tulsa, Ok for more than 20 years and worked for the Tulsa World as a print press operator for many years. Mr. Ahkeahbo then started serving as a counselor for the Tulsa Indian Youth Council and Indian Pupil Education for Tulsa Public Schools with Evans Ray Satepauhoodle and Archie Mason. Tommy formed a dance troupe, Summerbird Dance Troupe, where he encouraged Native American youth to participate in dance and learn their culture. Summerbird Dance Troupe travelled all over the U.S. performing in Washington D.C. In the 1980’s Tommy made a move to California, where he called home for the next 20 years before returning to Oklahoma. Mr. Ahkeahbo is survived by his children Tommy Chaino Ahkeahbo, Jr. “Tuffy” and wife Rona of Cushing, Ok. Tammy White of the home, Shawndae Lacey and husband Glenn of New Mexico, and Cottalene Deer and husband Richard of Tulsa, Ok. JoKay Dowell adopted daughter from Tahlequah, Ok. Grandchildren Alicia Chaino Ahkeahbo of Cushing, Ok. Amber Chavez and husband Ben of Cushing, Ok. Delanna Quinoines and husband Gabriel of Buckeye Arizona. Rebecca White, Jaimie White, and Stephanie White McCombs of Tulsa, Ok. Brett White and wife Shanae of Tulsa, Ok. Good Warrior, Grant and R.J. Deer of Tulsa, Ok. Jacob, Gabriel and Miranda Sarae Lacey of New Mexico. Cass Greenwood and wife Teresa of California. Eliot Greenwood and wife Kelly of Tulsa, Ok. 13 great grandchildren and numerous nieces and nephews. Pall Bearers are GoodWarrior Deer, Grant Deer, Brett White, Ben Chavez, Chasen Childers, Dallas Childers, Dr. Evan White and Jeffery Lyons. A viewing will be held at the Hayhurst Funeral home in Broken Arrow, Ok from 12-4pm Friday January 28, 2022. The family will then proceed to the Rebecca Roggers home place in White Oak, Oklahoma for all night wake services. Graveside services will be held at 9am Saturday January 29, 2022.

The family of Tommy Chaino Ahkeahbo, Sr. created this Life Tributes page to make it easy to share your memories.

Send flowers to the Ahkeahbo, family.