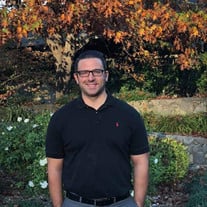 Timothy Donnelly was born on September 30, 1983 and grew up in Broken Arrow, the fourth child of Deacon John and Peggy Donnelly. He was baptized by his uncle, Father Timothy Donnelly OSB, on October 22, 1983 at Saint Benedict Church, where he... View Obituary & Service Information

The family of Timothy Michael Donnelly created this Life Tributes page to make it easy to share your memories.

Send flowers to the Donnelly family.