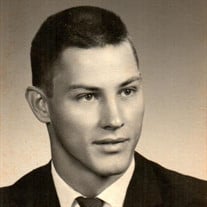 Thomas Larry Horn of Broken Arrow, Oklahoma, formerly of Oswego, Kansas, passed away Wednesday, December 1, 2021, at the age of 80. A graveside memorial service honoring his life will be held Tuesday, December 14th, 2021, at 1:00 at Memorial Park Cemetery in Tulsa. Thomas was born Tuesday, February 4, 1941, in Oswego, Kansas to Thomas and Juanita (Forkner) Horn. Thomas married Charla Pimsler in August 1987. He had three sons, Thomas, Jon and Robin. Tom graduated from Oswego High School in 1959. He attended Pittsburg State University and earned his Bachelor of Science degree in Industrial Technology in 1964. During his career as an industrial engineer, he worked for Phillips Petroleum, Wahadell, BS&B, Ford Motor Company, John Zinc Company and Koch Industries. He was the President of Lahoma Oil & Gas and performed his own geology work on the wells he drilled, as well as doing geology consulting for other oil & gas producers. He traveled the world throughout his lifetime visiting China, Indonesia, Africa, Europe, Japan, Australia, the Philippines, New Zealand and many other destinations. He was a talented craftsman and enjoyed woodworking and metalshop where he fabricated his own parts. He enjoyed upland bird hunting and trained his own birddogs. Later, he retired from hunting and began to care for the animals he encountered, feeding hawks, raccoons, coyotes, opossums, and other creatures along with his many beloved dogs and cats. Tom had a lifelong love of sports and was a talented basketball and football player for Oswego High School. He coached his sons in football, basketball and baseball and later, was often found cheering his grandchildren and great grandchildren on as they continued his sports legacy. He followed collegiate sports closely and was always ready for a good game. He will truly be missed by all that knew him and loved him. Those left to cherish his memory are Sons: Thomas Horn, and wife Shelly of Oswego, Kansas; Jon Horn and wife Sheila of Tulsa; Robin Horn and wife Stacey of Oswego, Kansas 13 Grandchildren 14 Great-Grandchildren Sister: Sandra Horn Sister-In-Law: Connie Horn Many nieces, nephews and other family. Thomas is preceded in death by: Wife: Charla Horn Brother: Patrick Horn Parents: Thomas and Juanita Horn Memorials may be made in lieu of flowers to Mercy Sakes Animal Rescue at www.mercysakes2ndchancerescue.com

Thomas Larry Horn of Broken Arrow, Oklahoma, formerly of Oswego, Kansas, passed away Wednesday, December 1, 2021, at the age of 80. A graveside memorial service honoring his life will be held Tuesday, December 14th, 2021, at 1:00 at Memorial... View Obituary & Service Information

The family of Thomas Larry Horn created this Life Tributes page to make it easy to share your memories.

Send flowers to the Horn family.