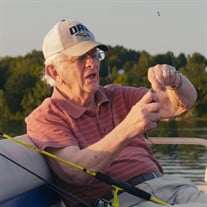 Theodore Fremont Spreiter, (Ted) was born in St. Paul, Minnesota on Friday, October 26, 1934 to Leslie Loren and Florence Marian (Mourer) Spreiter. He passed from this life into the presence of his Lord and Savior, Jesus Christ on Thursday, June 3, 2021 at his home in Broken Arrow, Oklahoma surrounded by his loving family. He was 86 years old. Ted grew up in Hector, Minnesota alongside of his two brothers, David and Steve. Their father was a banker and their mother a homemaker. All three boys attended school in the Hector school system. Ted graduated from Hector High School in 1952. He was very active in sports. He received his bachelor’s degree in 1956 from St. Olaf College in social work and economics and went on to earn a Master’s in Social Work from the University of Pennsylvania in 1962. Ted also attended Trinity Evangelical Divinity School in Deerfield, Illinois for two years. He completed one semester each at Moody Bible College and Oral Roberts University. Ted met Mary Payne while attending a class together at ORU in January 1967 and they were married three months later on April 14, 1967 in Tulsa, Oklahoma. They became parents to six children, four girls and two boys. Family activities they enjoyed together were church, Bible studies, fishing, and trips to Minnesota. The words Ted’s family use to describe him are a great dad, grandpa and friend. Ted professed his faith in Jesus Christ as his Lord and Savior when he was a child. He loved the Lord and served Him faithfully for many years. One of his passions was sharing his faith with anyone he met. He purchased Bibles by the case and kept them in the trunk of his car to give away to anyone who did not have one of their own. Ted worked as a social worker in Olivia, Minnesota for 4 years and 30 years as a social worker for the Oklahoma Department of Human Services in Tulsa. Countless children and their families were cared for by Ted during his career. Ted is survived by his wife of 54 years, Mary, of the home in Broken Arrow Daughter Chery Bruce (Mike) of Inola Son Terry Spreiter (Valerie) of Verdigris Daughter Elizabeth Jackson (David) of Tulsa Son Seth Spreiter (Natalie) of Tulsa Daughter Angie Boatmen (Jeff) of Tulsa Daughter Gwen Porter (Jeff) of Broken Arrow 12 Grandchildren, 17 Great Grandchildren, and numerous nieces and nephews He was preceded in death by his parents and his two brothers, David and Steve

Theodore Fremont Spreiter, (Ted) was born in St. Paul, Minnesota on Friday, October 26, 1934 to Leslie Loren and Florence Marian (Mourer) Spreiter. He passed from this life into the presence of his Lord and Savior, Jesus Christ on Thursday,... View Obituary & Service Information

Send flowers to the Spreiter family.