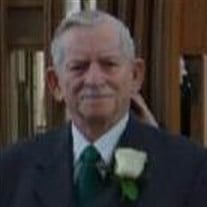 Ted was the youngest of four children born to Gordon and Edith, with two brothers and one sister. The Andress family lived in Tulsa until Ted’s sophomore year of high school when they moved to Webb City, Missouri. Ted was active playing basketball, baseball, running track and he played trumpet in the school band. He graduated from Webb City High School in 1949. After high school, Ted joined the U.S. Marine Corp where he fought in the Korean War from January 1951 until June 1952. He was awarded the Korean Service Medal and a U.N. Ribbon for his time in the Marines, as well as receiving a Purple Heart. Ted was proud of his service with the Marine Corp. After returning from Korea, Ted began preparing for his chosen profession. After earning his undergraduate degree Ted was accepted into the Illinois College of Podiatry in Chicago where he earned his Doctor of Podiatric Medicine. He met Barbara Ann Eisha and they married on Valentine’s Day, February 14, 1954. They became parents to six daughters and one son. He moved his young family at that time to Tulsa, Oklahoma where he opened his medical practice. He expanded to a second office in Bartlesville and continued practicing medicine for 50 years and even treated residents of several Nursing Homes until his retirement at the age of 78 in 2009. He and Barbara were married 46 years until her passing in 1999. His children remember lots of family time camping and playing games. Ted loved his children. They were his life. They describe him as having a love for family and wished that they always remain close, a man of high character and integrity. He raised his children in the Christian faith. One of his sayings was that his family “warmed the cockles of his heart.” Ted was a huge fan of the University of Tulsa and the St. Louis Cardinals baseball team. He was an avid bowler, loved to play golf and sang baritone with the Founders Barbershop Chorus, as well as singing Baritone in the Tulsa Tunes Quartet. He also loved to dance, both ballroom as well as country line dancing. One of his prize possessions was his 1955 Oldsmobile Rocket 88 automobile that had been completely restored. He remained single for nine years until while attending a country line dance class he met Margaret Furlong. The two hit it off and married on October 25, 2008. His children loved Margaret and immediately accepted her into their large family. Ted will be missed by all who knew and loved him. Left to cherish his memory are wife, Margaret of the home; Daughters, Debbie Fletcher (Robert) of Corpus Christi, Texas, Teri Chapman (Curtis) of Tulsa, Son, Ted Andress, Jr (Alona) of Tulsa Daughters, Shari Erdmann (Jeff) of Broken Arrow, Cindy Andress of Broken Arrow, Barbara McDonald (Bryan) of Berryville, Arkansas. 16 Grandchildren: Matthew Turner, April Turner, Rachel Bailey (Ben), Joshua Chapman (Brandy “Byrd”), Eric Chapman, Sean Chapman, Teddy Andress, III (Sydney), Tyler Andress, Thomas Lane, Jr. (Arica), Nicole Carson (Mitchel), Alyx Erdmann, Brandy Albert (Sean), Casey Erdmann (Whitney), Robert Cabrera, III, Olivia Thompson, and Sarah Withers, and 20 Great Grandchildren. He was preceded in death by his parents, Gordon and Edith Andress, two brothers, Gordon Jr. and William; sister, Joyce Andress, his first wife, Barbara, daughter, Lynda Blevins and son-in-law, Ben Blevins

Ted was the youngest of four children born to Gordon and Edith, with two brothers and one sister. The Andress family lived in Tulsa until Ted&#8217;s sophomore year of high school when they moved to Webb City, Missouri. Ted was active playing... View Obituary & Service Information

Ted was the youngest of four children born to Gordon and Edith,...

Send flowers to the Andress, family.