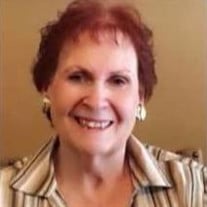 Susan Marie Schrader was born in Detroit, Michigan on Thursday, October 26, 1944 to John Mark and Phyllis Louise (Eberle) Kunath. She passed from this life to join her husband, Ron, and her loving Savior, Jesus, on Thursday, May 13, 2021 at her home in Broken Arrow, Oklahoma. Susan was the oldest of four children, with two sisters and one brother. Susan was born with a deep love for God and a servant’s heart, both of which guided her throughout life. She graduated from Regina High School in Harper Woods, Michigan in 1962 and attended Grace Hospital School of Nursing in Detroit, Michigan. However, her desire to serve God led her to join the convent. Shortly thereafter Susan realized nursing was a better fit and left the convent as a postulate. She returned to school and earned her LPN (Licensed Practical Nurse) certification. In 1964 she met Ronald Schrader following his return home from serving his country in the U.S. Army. They were married on October 2, 1965 in Detroit, Michigan. Susan ministered to many people throughout her 40 year career as a nurse (LPN) and many more as a missionary later in life. Susan and Ronald became parents to five children: two sons and three daughters. In 1984, Ronald and Susan moved their family to Tulsa, Oklahoma. They soon became active members of Victory Christian Center where Susan and Ronald both sang in the choir. In 2011 Susan became an ordained minister. Susan’s continued love for the Lord and desire to serve him, led to many opportunities to serve as a missionary overseas in countries such as Rwanda, Russia and Ukraine. Susan lived a life that was truly blessed and highly favored. She had a smile that lit up the room, a compassionate heart, a vibrant personality, endless energy and an innate ability to be in the right place at the right time. Susan was loved by all who met her and will be missed tremendously. In lieu of flowers, please consider donating to City Lights Foundation of Oklahoma at: https://citylightsok.org Susan is survived by: Daughter, Mary Suzanne Breedlove of Tulsa Son, Josef Allen Schrader and his wife, Stephanie of Tulsa Son, Daniel Thomas Schrader of Tulsa Daughter, Kristine Erica Schrader of Tulsa Daughter, Molly Rebekah Wolter of Tulsa Sister, Nancy Lee Schmitt and her husband, Robert of Brighton, Michigan Sister, Janet Louise Stolarski of Clermont, Florida Brother, Donald John Kunath of Perth, Australia 9 Grandchildren: Korina Elizabeth, Christopher Allen, Katelyn Elizabeth, Makena Nicole, Tyler James, Cooper Allen, Madeline Elizabeth, Lucan Gregory, and Jayden Daniel 3 Great Grandchildren: Elijah James, Kimberlin Grace and Emma Marie She was preceded in death by her parents John and Phyllis Kunath; her stepmother Agnes Kunath; and her husband Ronald Schrader In lieu of flowers, please consider donating to City Lights Foundation of Oklahoma at: https://citylightsok.org

Susan Marie Schrader was born in Detroit, Michigan on Thursday, October 26, 1944 to John Mark and Phyllis Louise (Eberle) Kunath. She passed from this life to join her husband, Ron, and her loving Savior, Jesus, on Thursday, May 13, 2021 at... View Obituary & Service Information

Susan Marie Schrader was born in Detroit, Michigan on Thursday,...

Send flowers to the Schrader family.