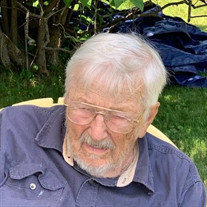 Steven L. Schluneger was born Tuesday, August 25, 1931 in Enid, Oklahoma the son of William Herman and Frances (Turner) Schluneger. He passed from this life at Lakeview Memorial Hospital in Two Harbors, Minnesota on Wednesday, February 12, 2020. He was 88 years of age. Steven was a graduate of Cascia Hall Preparatory School in Tulsa, Oklahoma. He attended the University of Tulsa, receiving a degree in Geology, Masters in Math and PHD in Applied Mathematics. He married the former Miss Mart Rita Robertson on July 29, 1951in Arkansas. Steven worked as a geologist for Kings Ranch. He was an avid reader who enjoyed baseball statistic and anything related to Math and Science. He enjoyed his knife business, with a fascination in the different metal materials of which they were made. The family requests memorials to United Cerebral Palsy, www.ucp.org He is survived by, Wife, Rita Schluneger, Two Harbors, MN Daughter, Dierdre Schluneger and Companion George Hyland, Two Harbors, MN Son, Steve and wife Gina Schluneger, Two Harbors, MN Grandchildren, Marta, Lauren, Peter, Shannon, Rob, Ryan, Francie, Stefan and William Eight Great Grandchildren He was preceded in death by his parents, William and Frances, son, Bill and grandchildren, Erik and Christian. Obituary pending

The family of Steven Schluneger created this Life Tributes page to make it easy to share your memories.

Send flowers to the Schluneger family.