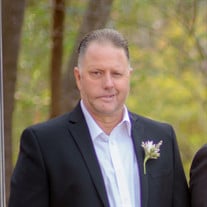 Steven Lee Allison was born on November 18, 1966 to proud parents Larry and Diana (DeLucca) Allison, of Broken Arrow, OK. He passed this life and went to eternity on January 7, 2021 at age 54. Funeral services have been scheduled for 11:00 a.m. on Weds., January 13, 2021 at BattleCreek Church in Broken Arrow where he was a member. Burial will follow at Calvary Cemetery in Tulsa under the direction of Hayhurst Funeral Home. Steve was a 1985 graduate of Broken Arrow High School and stayed in touch with numerous classmates over the years. He met the love of his life, Trish, in 2000 and they have many great memories of traveling, cruising, going to the lake and enjoying family events. Steve’s witty sense of humor, infectious smile and caring nature made an impression on everyone who crossed his path. Steve was a talented handyman who could fix almost anything and was always there to help others. He was an avid Chili Bowl Nationals fan and attended every year. In addition to his family, one of Steve’s greatest joys came from racing, which he grew up watching with his dad and brothers. Steve started his racing career during high school at the Port City Raceway in Catoosa and Tulsa Speedway, where he was considered a local celebrity at the dirt tracks. In the 90’s, he attended the Buck Baker Racing School in Charlotte, North Carolina and traveled to many states racing in NASCAR’s sanctioned, asphalt Sportsman Division. He moved on to the NASCAR SuperTruck series and ended in the early 2000’s. In 2020, Steve re-started his racing career with son Steven Allison, Jr. in the Legend Cars division at Hallett Motor Speedway, carrying on the family tradition. Steve owned and operated Broken Arrow business, OklaHome Inspections, and was well known and respected in the real estate and home inspection community. He combined his love for racing with his business by leading an annual “Charity Kart Race” from 2015-2019. The event drew hundreds of local realtors to compete in teams, with proceeds donated to local charities. Steve’s exemplary work ethic and attention to detail was instilled in his staff and his legacy will continue with the business he built more than 12 years ago. Steve loved the Lord and relied on his faith to get him through the greatest battles of his life, which included fighting Covid-19. The family takes comfort in knowing they were with him when he peacefully passed to eternity and that he is now healed and whole in heaven. Steve is survived by, His wife, Trish Allison, realtor, Broken Arrow, OK Daughter, Lauren and husband Brandon Cusick, Verdigris, OK Sons,​Josh and wife Amanda Willinger, Haskell, OK ​Jonathan and wife Debora Willinger, Fort Worth, TX ​Steven Lee Allison Jr., Broken Arrow, OK Grandchildren, Braden Cusick; Kale, Kyler and Kole Willinger Mother, Diana Allison, Broken Arrow, OK Brothers, David and wife Twilla Allison, Broken Arrow, OK ​ Monte and wife Michara Allison, Broken Arrow, OK Nieces, Diana (Dee) Allison, Brooke Mathis and Megan Kashwer of Broken Arrow; Nephew, Austin Allison of Coweta; four great nephews and a great niece. Beloved French bulldog, Cosmo Allison Many extended family members and close friends who will miss him dearly. He is preceded in death by his father, Larry Allison. The family would like to thank the health care workers in the Covid ICU who cared for Steve during his last 25 days on earth. In lieu of flowers, donations can be made to The Steven Allison Jr. College Fund at First National Bank of Broken Arrow, 121 S. Main Street, Broken Arrow, OK 74012.

Steven Lee Allison was born on November 18, 1966 to proud parents Larry and Diana (DeLucca) Allison, of Broken Arrow, OK. He passed this life and went to eternity on January 7, 2021 at age 54. Funeral services have been scheduled for 11:00... View Obituary & Service Information

The family of Steve Allison created this Life Tributes page to make it easy to share your memories.

Send flowers to the Allison family.