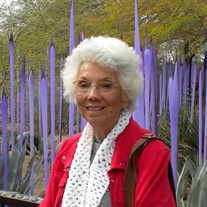 Shirley Darline McMinn was born on Sunday, April 2, 1939 in Briartown, near Porum, Oklahoma; the daughter of Babe and Helen (Smith) Starr. She passed from this life at her home in Tulsa on Saturday, August 15, 2020 surrounded by her family. She was 81 years of age. Shirley loved the Lord, her family, and her church. She enjoyed telling stories of summers spent helping her Grandma Nettie with farm work and learning about her Cherokee heritage. Her favorite place was her flower garden, growing beautiful roses. Her dad worked for the railroad, which gave her the chance to live in many places during her childhood. She reflected fondly on her years in Dumas, TX and Alameda, CA but was happy to return to OK for high school, where she graduated from Tulsa Central High in 1957. She met Roger McMinn while out with a girlfriend at Foley’s Café (Porum) in early 1959 and they married on October 29, 1959 at First Baptist Church in Sapulpa, OK. They moved to Phoenix, AZ when Roger returned from the Army in 1963. It was there that they adopted their daughter in June 1971. Upon returning to Oklahoma in 1974, she and Roger owned several small businesses in Checotah, OK but she loved working with the elderly and returned to school to complete a degree in Nursing from Connors State College and began working as a home health aide. Shirley and Roger moved back to Arizona in 1989, where they spent the last 13 years in Sun City. Shirley retired from Banner Health in 2001 and returned to her hobbies of gardening, crocheting, and shopping. She loved dining out with friends and was a member of Family Life Assembly of God and Evangel Church. The family requests memorials be sent to the Alzheimer’s Association Oklahoma Chapter, 2448 East 81st Street, Suite 3000, Tulsa, OK, 74137. She is survived by, Husband, Roger McMinn, Tulsa, OK Daughter, Andrea “Andi” Gordon, Nampa, ID Sister, Cathy Anderson, San Luis Obispo, CA Shirley was preceded in death by her parents, Babe and Helen, a brother, Jack Starr.

Shirley Darline McMinn was born on Sunday, April 2, 1939 in Briartown, near Porum, Oklahoma; the daughter of Babe and Helen (Smith) Starr. She passed from this life at her home in Tulsa on Saturday, August 15, 2020 surrounded by her family.... View Obituary & Service Information

Send flowers to the McMinn family.