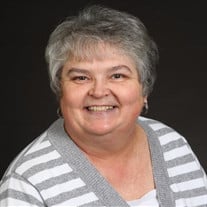 Jim and Sherry Barbee unexpectedly joined the heavenly multitude within an hour of each other on Friday, February 12, 2021 in Tulsa Oklahoma. A joint service will be held at 1:00 pm, Monday, February 22, 2021 at The Assembly in Broken Arrow, Oklahoma under the direction of Hayhurst Funeral Home. Sherry was born Sharon Ruthann Lively to parents Kenneth and Skeet (Juanita Rose) Lively on August 19th, 1951 in Seminole, Oklahoma. Jim was born Jimmy Dale Barbee to parents Cecil and Reba Barbee on July 31st, 1953 in Claremore Oklahoma. From the moment Jim saw Sherry, he knew they would be together the rest of their lives. They met and got married in six weeks and were side by side for 47 years. Jim and Sherry cherished walking through life hand in hand. They enjoyed anything, as long as they were together. Some of their favorite pastimes were spending time at the lake, motorcycle drives on the Talimena drive through the rolling hills of Oklahoma and Arkansas, trips to the ocean, Branson and Hawaii. But more than anything - they loved family time with their children and grandchildren. Jim enjoyed Hallmark movies and Sherry loved Big Cats! Both were active in their community and loved God more than anything else they attended The Assembly in Broken Arrow where they served as children's church leaders for many years. Jim worked and ran Jim's Auto Service where he chose the opportunity to minister to anyone who crossed his doorstep. Sherry worked at Oral Roberts Evangelistic Association for many years before she left to care for Reba Barbee in Reba’s later years. Both opened their hearts and home to anyone who needed or wanted a good meal, good conversation and the listening ear or shoulder to cry on. They were known as Mom and Dad Barbee to many of the kids in Broken Arrow. Togetherness was not simply a word to Jim and Sherry; it was their way of life! “You will be missed beyond what words can capture. God gained two Angels and we know we will see you again.” Jim and Sherry are survived by, Daughter, Melissa Dugger and husband, Philip Daughter, Shelly Davidson and husband, David Son, Kenneth Barbee and wife, Megan Grandchildren, Lauren Stephens, Chad Stephens, Tiffany Stephens, Joseph Stephens, Zachary Davidson, Channing Davidson, Samantha Barbee, Madison Barbee, Peyton Barbee, Brynley Barbee Sherry’s Father, Kenneth Lively Sherry’s Sisters, Kat Lively, Jeanne Alcott and husband, John, Abbie Clyburn and husband, Tony Jim’s Brothers, Edward Barbee and wife, Barbara, David Barbee Jim’s Sister-In-Law, Brenda Barbee They were preceded in death by son, Jimmy Dale Barbee, Jr., Skeet (Juanita) Lively, Cecil and Reba Barbee, Joyce Barbee, Jerry Barbee and Myrna Barbee.

Jim and Sherry Barbee unexpectedly joined the heavenly multitude within an hour of each other on Friday, February 12, 2021 in Tulsa Oklahoma. A joint service will be held at 1:00 pm, Monday, February 22, 2021 at The Assembly in Broken Arrow,... View Obituary & Service Information

Send flowers to the Barbee family.