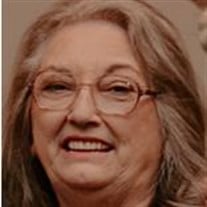 Sandra Jane (Fredrickson) Hanning was born in Bentonville, Arkansas on Monday, November 7, 1949, to Hadley “Babe” Maynard and Connie Marie (Wiley) Fredrickson. She passed from this life on Saturday, January 1, 2022, in Tulsa, Oklahoma at the age of 72. Sandra was the 3rd of 7 children born to the Fredrickson’s with 4 sisters and 2 brothers. Although she was born in Arkansas, her family moved to Sioux Falls, South Dakota early on. Sandra attended school and graduated from Sioux Falls, Madison Central High School in 1967. Later they moved to Sedalia, Missouri. Their father (Babe) was a truck driver, and their mother (Connie) owned a café in Sedalia where Sandra worked for a time. A couple of years later, she met and fell in love with Ronald Hanning. They married on November 3, 1969, in Sedalia, and eventually became the parents of four sons. Sandra also attended Rogers State College in Claremore, Oklahoma where she received her associate degree. She owned a screen printing and graphic arts business for several years, and also worked for one of her son’s restoration business as an office manager. Known as grandma to her seven grandchildren, Sandra loved family gatherings. She was a great cook. Her breakfasts were legendary. And no one ever passed up a slice of her famous cheesecake. Words her family used to describe her are witty, loving, loyal, funny, empathetic, caring and concerned. She enjoyed staying connected with family and friends through Facebook on a regular basis. She will be missed by all who knew and loved her. Left to cherish her memory are husband, Ron, of their home in Broken Arrow Son, David Mathew Hanning (Priscilla) of Tulsa Son, James Earl Hanning (Vicky) of Broken Arrow Son, Aaron Hadley Hanning (Kendall) of Tulsa 7 Grandchildren: Preston, Kelsea, Marissa, Daniel, Sierra, Avery, and Elijah Sister, Sharon Wiertsema of Rushmore, Minnesota Sister, Colleen Spielman (Ross) of Dallas, Texas Sister, Susan Morris (Jeff) of Sedalia, Missouri Brother, Jeff Fredrickson of Sedalia, Missouri Sister, Charlene Reque (Tom) of Columbia, Missouri Brother, Todd Fredrickson (Cherie) of Sedalia, Missouri Those who preceded her in death are her parents, “Babe” and Connie Fredrickson and one son, Ronald Wayne Hanning. A Celebration of Life for Sandra will be held on Saturday, January 8, 2022, at 11:00 AM at Rick’s Place, 33904 East 111th Street in Coweta. Lunch will be provided.

The family of Sandra Hanning created this Life Tributes page to make it easy to share your memories.

Send flowers to the Hanning family.