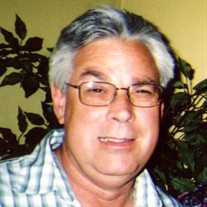 Ryan Edmond Pray was born on Friday, January 18, 1952 in Holdenville, Oklahoma. He was the firstborn child of Glenn Andrew Pray and Frances Juanita (Ball) Pray. He passed this life and went to be with the Lord on December 27, 2021, surrounded by his family. He was 69 years of age. Ryan grew up in Broken Arrow and Tulsa, graduating from Hale High School in 1970, then attending OSU. He joined the United States Army and served in the Signal Corp. in Washington State. He was employed by American Airlines as a Mechanic until his recent retirement. He enjoyed building motorcycles and restoring classic cars. He most recently gathered his friends and started a motorcycle riding club that met every week. He had an interest in antique aircraft, piloting open cockpit airplanes at a young age along with his father and siblings. His family was responsible for bringing Auburn Cord Duesenberg Company to Broken Arrow, Oklahoma which is still currently located at Elm Street and Broadway. It has been a family run operation since 1960. He attended New Heart Church and was involved in the Heart of the Craftsmen, a program that teaches and involves youth in auto mechanics. Ryan was a loving husband and devoted father. He was a selfless soul that will be missed by all who knew him. Left to cherish his memory are his wife, Sandra, of the home; Sons, Christopher Walters of Broken Arrow, Nathan Pray and wife, Amanda, of Las Cruces, New Mexico Brother, Doug Pray and wife, Jill, of Tulsa, Oklahoma Sister, Gayle Fritts and husband, Bill, of Tulsa, Oklahoma Numerous Nieces and Nephews Ryan was preceded in death by his parents, Glenn Pray and Nita Creekmore. Burial with VFW honors will be 9:00AM Thursday, December 30, 2021 at Park Grove Cemetery. Services will follow at 10:00AM Thursday, December 30, at Hayhurst Funeral Home Chape

Ryan Edmond Pray was born on Friday, January 18, 1952 in Holdenville, Oklahoma. He was the firstborn child of Glenn Andrew Pray and Frances Juanita (Ball) Pray. He passed this life and went to be with the Lord on December 27, 2021, surrounded... View Obituary & Service Information

Send flowers to the Pray family.