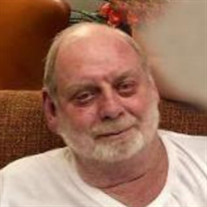 Roy Dean Sturgeon was born in Broken Arrow, Oklahoma on Friday, May 15, 1942, to Roy Jesse and Louise Martha (Carter) Sturgeon. He passed from this life to his eternal home in heaven on Wednesday, August 11, 2021, at his home in Coweta surrounded by loved ones. Roy was the oldest of three children born to Roy Jesse and Louise. He was a good big brother and remained close to his brother and sister his entire life. Their father worked as a plant supervisor. Their mother was a homemaker and retired Tulsa County Court Clerk. Roy Dean Sturgeon literally spent his whole life in Broken Arrow. He was born at the Broken Arrow Hospital at Broadway and Main Street and lived in and around downtown Broken Arrow all his life. He remembered going into Broken Arrow as a youngster with his mother and grandmother. While the ladies did their shopping, the kids would sit on the cars and visit with people who passed by or play dominoes. Roy learned his strong work ethic at a young age. Some of Roy’s early work experiences were Shining Shoes at Jack’s Barber Shop, working at the Ben Franklin Store, and weighing and measuring milk at the Glen Cliff Dairy where he was known for giving free samples of ice cream to the pretty girls who frequented the shop. Roy also enjoyed cars and “cruising” Main Street in a 1954 Ford 2 door hard top and a 1958 Pontiac Starchief. Roy mentioned that the local “Constable” use to ‘hide out’ and try to catch you past curfew. Roy did say he might have violated curfew once or twice – and might have been “well known” to Smoky Brown – The Local Constable. Roy was a 1959 graduate of Broken Arrow High School. After that, he received his associate degree from the then Tulsa Junior College. Roy met and married Charlene Rankin on June 13, 1959, in Miami, Oklahoma. They were blessed with two daughters and were married for 44 years until her passing in 2004. Together they started RDS Manufacturing in Broken Arrow, Oklahoma for many years. After Charlene’s death, Roy was fortunate to meet and marry his wife – Denise. They were married on July 7, 2007 in his beloved Broken Arrow. Together they have designed and built a fabulous “loft residence” right on Main Street, BA, OK, USA – as well as a family Compound in Coweta. Their favorite place was being home with their beloved poodles, Bugs Bunny and Tiffany. Roy loved watching birds but was especially partial to hummingbirds. …NOW, some of the rest of the story… RDS remained a family owned business until a few years ago, but is still based in Broken Arrow, OK, USA. They employ 110-120 highly skilled engineers and craftsman that make some of the most sophisticated parts, for some of the most well-known corporations in America and around the world. RDS is now Solar, which is a division of Caterpillar. There is more than 100,000 square feet of climate controlled factory space under roof. And for those of you that have ever toured the plant, you know that it was truly clean enough inside to eat lunch on the “shop floor”! (Roy just would not have it any other way!) What most folks do not know is that Roy’s multimillion dollar living restoration and renovation of multiple historic downtown BA buildings were meant to be gifts to Broken Arrow that would jump start the “Rose District” and rejuvenate, renovate, and bring “LIFE” back to downtown Broken Arrow. Roy’s wish for downtown Broken Arrow is also one of his fondest memories…just seeing folks walk the sidewalks once again and visiting the many shops and restaurants on Main Street – and actually getting to know their neighbors. Well, Roy, from the looks of things “happening” on Main Street – we would all like to say – thanks for a job well done by one of Broken Arrow’s Favorite Sons. In addition to these downtown gifts, Roy has supported just about every BA Charity and civic project for more than 40 years. Roy has made major donations to the Broken Arrow Community Foundation for local scholarships, Broken Arrow Neighbors, Chamber of Commerce, Miss Broken Arrow Pageant, Rotary, Veterans programs – and the list could go on all evening long. A long-time member of the Broken Arrow Chamber of Commerce, Roy was honored as their Citizen of the Year in 2005. In 2005, Roy and his children established a rose garden at Nienhuis Park, located in the traffic circle. It includes hundreds of roses, a large native stone that holds plaques and an art piece. So the next time you take a stroll on Main Street BA, USA; just say a quick prayer thanking the Good Lord for Roy Dean Sturgeon and the Legacy he has left for all the citizens of Broken Arrow, and our great nation. We love you and will miss you – always! Left to cherish his memory are wife Denise of their home in Coweta Brother, Ron Sturgeon (Anna) of Tulsa Sister, Sandi Sparks (Landy) of Broken Arrow Daughter, Sheri Smith of Coweta Daughter, Dana McComis of Coweta Bonus Children, Dana Balbontin (Alexis) of Coweta Carrie Davidson (Bryan) of Coweta Grandchildren, Katie McComis (CT) of Broken Arrow Kristen Mobley (Johnny) of Broken Arrow Kelsey Henderson (DJ) of Henderson, Nevada 6 Bonus Grandchildren and numerous Great Grandchildren He was preceded in death by his parents and granddaughter, Sara Whisenhunt In lieu of flowers, the family asks that you consider a donation in Roy’s name to either St. Jude Children’s Research Hospital at www.stjude.org or Shriners Hospitals for Children at www.donate.lovetotherescue.org

Roy Dean Sturgeon was born in Broken Arrow, Oklahoma on Friday, May 15, 1942, to Roy Jesse and Louise Martha (Carter) Sturgeon. He passed from this life to his eternal home in heaven on Wednesday, August 11, 2021, at his home in Coweta surrounded... View Obituary & Service Information

The family of Roy Dean Sturgeon created this Life Tributes page to make it easy to share your memories.

Send flowers to the Sturgeon family.