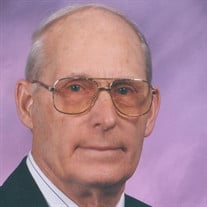 Roy Monroe Adams Jr, of Broken Arrow, passed away March 21, 2020 at the age of 95. Private family services will be held. Friends may visit Roy at the funeral home 12-5 pm, Wednesday, March 25th. Roy was born November 2, 1924 to Roy Adams Sr. and wife Bessie (Grant) in Monticello, Arkansas. On October 29, 1946, Roy married the love of his life, Charlotte Stetler, and their union was blessed with three daughters; Janet, Joan, and Nancy. Roy honorably served his country as a member of the Army Air Corp during WWII as a mechanic mainly on P-38’s. He worked as a regional mechanic for Williams Pipeline and was known for his mechanical skills. He was a devout Christian. He diligently studied his Bible, led family devotions at the breakfast table, served many churches as treasurer and song leader, loved gospel quartet music and was known for his integrity and honesty Roy and Charlotte were sponsors for Mother Charlotte’s Home for Orphans in India in which the administrators children were named in their honor.. He never was one to gossip and never spoke ill of anyone. Roy loved to fish, could grill the best BBQ chicken and steaks you ever had, and was always and Old School Gentleman. Survivors include: Daughters Janet Adams of Sapulpa Joan Wanson and Tom of Franklin, NC Nancy Carr and Gary of Broken Arrow Grandchildren Jim Miller Charlotte Couch and Kevin William Umbel Blake Umbel Great-Grandchildren Cameron, Conner, Christian, Claire, Blakely, Brayden Umbel, Cooper Umbel, and Cailey Umbel Roy is predeceased by: Wife Charlotte Adams Parents Roy Sr. and Bessie Adams Sister Ida Mae Korn

The family of Roy Adams created this Life Tributes page to make it easy to share your memories.

Send flowers to the Adams family.