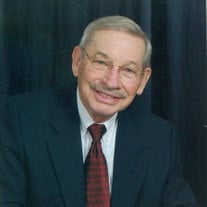 Services honoring the life of Ross Roger Copley will be 10:00 a.m., Wednesday, March 11, 2020 at First United Methodist Church, Broken Arrow, Oklahoma. Burial will follow at Floral Haven Memorial Gardens. Visitation will be at the funeral home on Tuesday, from 6:00 p.m. to 8:00 p.m. Ross Roger Copley was born in Woodburn, IA on May 29, 1933 to Fred and Lena Copley. Fred and Lena produced a loving family with 8 children. Ross has 3 sisters and 4 brothers. He has a fraternal twin brother, Russell, whom Ross claimed to be his best friend and a grand person. They grew up in Southern Iowa on a dairy farm and Ross said it was a wonderful life. He graduated from Corydon High School before going to Iowa State University for 2 years prior to serving 2 years in the Army. While in the Army he married his high school sweetheart, Shirley Hosey in 1954. Ross and Shirley had 2 daughters they loved very dearly. Melinda Lou and Susan Diane. After serving in the Army, Ross returned to Ames, IA to finish his Engineering degree. Before moving his family to Tulsa in 1962, he held professional jobs in Peoria, Ill and Ames, IA. In Tulsa, he worked 32 years for the Corp of Engineers, retiring in 1994. Ross was an accomplished employee. While at the Corp, he was Chief of Reservoirs Control Section. Following retirement from the Corp, he worked 10 years for Knox Home Inspections. Shirley, his wife of almost 50 years, passed away in 2003. They had enjoyed raising their girls, square dancing, bowling, etc. Ross was a great bowler, earning a 299 ring. As time went by, Ross became lonely and turned to friends. Ross was introduced to Jean by the wife of an Engineer who worked with Ross at the Corp. Jean was their neighbor in Mid-Town. Ross and Jean met on a blind date to play bridge and it was together with love for them. They married in 2006 and were so happy. They traveled and cruised a lot. They were members of First United Methodist Church of Broken Arrow, The Elks Lodge #946, and Ross was a member of Tulsa Men’s Club. Ross and Jean loved to play bridge, dance (Ross was a great waltzer), garden, and just being together these past 14 years. Ross was truly a wonderful man and will be missed tremendously! Ross is survived by his spouse and her loving family, his daughters and their spouses, 4 grandchildren, Brian, Kevin, Jackson, and Kaitlyn, and many other friends and family members including that special twin brother Russell, and his great younger brother Ron.

The family of Ross Copley created this Life Tributes page to make it easy to share your memories.

Services honoring the life of Ross Roger Copley will be 10:00...

Send flowers to the Copley family.