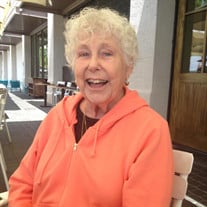 Rose Ann Gaffney was born in New York City, New York on Monday, July 26, 1937, to parents Thomas and Bridget (McCabe) Kilfeather. She passed at her home in Broken Arrow, Oklahoma on Monday, February 21, 2022, at the age of 84 years. Rose grew up in Washington Heights, the daughter of Irish Immigrants. Her family fondly referred to Rose as “Buncy”. She was a devout Catholic. She met Paul Gaffney and they married in New York City on June 13, 1959. She was a devoted mother and wife, who doted on and loved her family dearly. Buncy enjoyed a cup of HOT tea with a smidge of milk. She was a volunteer for Catholic Charities Ministry of Compassion, The Little Lighthouse and delivered Meals on Wheels with her husband. Paul took her traveling around the world. She was very proud of her heritage and was fortunate to have visited Ireland. In the last two years of her life she was able to remain in her home due to the selfless sacrifice of her loving daughter, Julie and her granddaughter, Bridgit. She is survived by, Husband, Paul Gaffney of Broken Arrow, Oklahoma Sons, Tim Gaffney & Becky of Broken Arrow, Oklahoma Michael Gaffney & Sergio of San Francisco, California Daughter, Julie Sparks & Kyle of Broken Arrow, Oklahoma Granddaughter, Bridgit King of Broken Arrow, Oklahoma Greatgrandchild, Jaiden Yenny Preceded in death by parents, daughter, Christine Gaffney, sisters, Elizabeth Burke and Kathleen Mark. In lieu of flowers, please consider donating to Catholic Charities, 2450 N. Harvard Avenue Tulsa, OK 74115

The family of Rose Gaffney created this Life Tributes page to make it easy to share your memories.

Send flowers to the Gaffney family.