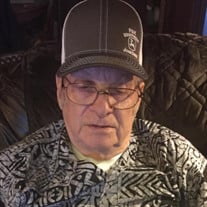 A Funeral Service remembering the life of Ron Hill will be held on Friday, April 30, 2021 at 11:00 AM at the Hayhurst Funeral Home Chapel in Broken Arrow. The family requests all attendees wear masks to keep everyone safe from the COVID virus. Burial at Floral Haven Memorial Gardens will follow. Ronald Lee Hill was born in Ada, Oklahoma on Monday, September 8, 1941 to Carl Bentley and Ila Grant (Byrd) Hill. He passed from this life on Saturday, April 24, 2021 at his home in Broken Arrow, Oklahoma at the age of 79. Ron was the oldest of three sons born to Carl and Ila. His father was a rancher who also worked in the oil fields and drove a school bus part time. His mother was a stay-at-home mom. Ron and his second brother, Charles were close in age. Their third brother, Donald, came along some seventeen years later. Growing up in rural Ada, the boys found their own entertainment which included throwing corn cobs and persimmons at each other. Ron had an ornery streak in school. The story is told of he and a classmate buddy who once put a cow in the school building over a weekend. However, their prank ended up with them having to clean up quite a mess when they got caught at the end of that weekend. Ron graduated from Tupelo High School in 1958. After high school, he joined the Army Reserves and served a total of six years. His first marriage resulted in the birth of two sons, Jeff and Michael Shane. Ron coached little league baseball and enjoyed fishing as a hobby most of his adult life. When his first marriage ended, he was single for several years until some mutual friends who were co-workers introduced him to Sharon Schulze. They dated for a year before marrying on October 6, 1984 in the home where they lived for many years. They had one daughter, Nicole, together. When Nicole had her first girlfriend’s sleepover, she tells the story of how Ron snuck outside and frightened all the girls by pretending to be the “boogeyman”. The girls screamed and Ron got the biggest kick out of that prank! He was a bit cantankerous and enjoyed a good laugh. His family lovingly called him the “grumpy old man”. He remained friends with many people in Ada from his time growing up there and when the family would go there to visit, he would stop to go into a store and leave Sharon and Nicole in the car. He would tell them he would just be a minute and an hour later he would return after talking with an old friend he had seen in there. Besides fishing as a hobby, he also collected fishing tackle, NASCAR memorabilia, and tools. If any of his friends or neighbors ever needed a tool, they knew who to come to to borrow one. Ron worked for many years as a Parts Counter Man. His last job before his retirement was with Bob Hurley GMC in Tulsa. He always had a group of buddies to hang out with through the years. For the last several years, every Saturday morning was spent having breakfast with two of those friends. Eventually Sharon even got an invite to those breakfasts and enjoyed that time spent with Ron and his friends. Ron will be missed by all who knew and loved him. Special thanks to the folks at Emerald Hospice who provided such wonderful care for Ron in his last weeks of life. In lieu of flowers, the family requests donations be made to Austin Pets Alive at: 1156 W. Cesar Chavez Street Austin, TX 78073 or www.austinpetsalive.org Ron is survived by: His wife, Sharon of the home in Broken Arrow Son, Michael Shane Hill and his wife, April of Frisco, Texas Daughter, Nicole Hill and her husband, Thomas Brown of Austin, Texas Brother, Charles Hill and his wife, Ann of Ada Brother, Donald Hill and his wife, Trish of Centrahoma Uncle, James Hill and his wife, Shirley of Ada Grandsons: Bryden Hill, Alex Hill, and Connor Hill Great Grandson: Zyden And many nieces, nephews, and cousins He was preceded in death by his parents Carl and Ila Hill; son, Jeff D. Hill and a very special aunt, Lurie Cross

A Funeral Service remembering the life of Ron Hill will be held on Friday, April 30, 2021 at 11:00 AM at the Hayhurst Funeral Home Chapel in Broken Arrow. The family requests all attendees wear masks to keep everyone safe from the COVID virus.... View Obituary & Service Information

The family of Ronald Lee Hill created this Life Tributes page to make it easy to share your memories.

A Funeral Service remembering the life of Ron Hill will be held...

Send flowers to the Hill family.