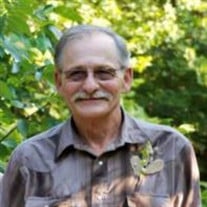 Ronald Lee Duke was born in Tulsa, Oklahoma on Monday, April 15, 1946, the only child of James Elmer and Lily June Barnes. He passed from this life on Thursday, February 4, 2021 in Tulsa, Oklahoma at the age of 74. Better known as Ron to his family and friends, his mom was a draftsman for the city of Tulsa and his dad was a cattle rancher. He attended Charles Page High School in Sand Springs where he was in band and ran the mile on the track team. Ron graduated from there in 1964. Shortly after high school he was drafted into the U.S. Marine Corps but due to an injured knee he was unable to serve. After that, Ron moved to California. He got into Figure 8 Car Racing, found work as a stunt man working a whip in western scenes, and was a bouncer there for many years. He also worked as a welder and route sales. He bounced back and forth between Oklahoma and California for a few years before settling down in Oklahoma. He met the love of his life, Debbie, at Duke’s Country while line dancing. They married on October 26, 1984 and have been happily married since for the last 36 years. Ron was father to two children: one son and one daughter. He coached both of his kids in soccer through the Broken Arrow Youth Soccer program. The family enjoyed camping on local rivers and lakes and spending time fishing together, especially when the crappie were running. Ron was an all-around handy man and never called a repair man to fix anything. He loved remodeling, working on cars, and just fixing things in general. Nothing was every too small or too big for him to try and fix. One of Ron’s interests his entire adult life was video games. He played Call of Duty, Clash of Clans, Mobile Strike, and other war strategy games on his iPad. His family described him as confident, stubborn, crazy, funny, talkative, bold, outspoken, one who never met a stranger, and a prankster. Chelsea recalled times he and she would hide in the closet from one another waiting to jump out and scare the other one. Ron loved his family as well as their four dogs, who will all miss him dearly. Ron is survived by: His wife, Debbie, of their home in Broken Arrow Daughter, Chelsea Duke of Coweta Son, James Duke of Oklahoma City He was preceded in death by his parents James and Lily “June”

Ronald Lee Duke was born in Tulsa, Oklahoma on Monday, April 15, 1946, the only child of James Elmer and Lily June Barnes. He passed from this life on Thursday, February 4, 2021 in Tulsa, Oklahoma at the age of 74. Better known as Ron to his... View Obituary & Service Information

The family of Ronald Duke created this Life Tributes page to make it easy to share your memories.

Send flowers to the Duke family.