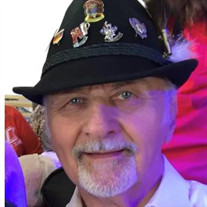 Ronald Joseph Schrader was born on Wednesday, November 6, 1935 in Hamtramck, Michigan to Adolph and Veronica (Klimek) Schrader. He passed from this life into the arms of his loving Savior on Sunday, April 25, 2021 in his home in Broken Arrow, Oklahoma surrounded by family. Ronald was the only son, growing up with 3 sisters. He graduated from Denby High School in 1954 and shortly after enlisted in the U.S. Army. After returning home from his time in the service, he met Susan Kunath, and they were married on October 2, 1965 in Detroit, Michigan. They became parents to five children: two sons and three daughters. In 1984, Ronald moved his family to Tulsa, Oklahoma. They soon became active members of Victory Christian Center where Ronald and Susan both sang in the choir. His children describe him as a devoted father, playful and witty, a man of integrity, compassionate and generous with a strong work ethic. Ronald was a man who loved the Lord with all his heart and passed on these values and faith to his children and grandchildren. He studied the Bible daily and used every opportunity to show the love of Christ through his life. Over the course of his 20 year career at Rockwell International, Ronald won several awards for his creative problem-solving ideas and inventions as an Electrical Engineer. After almost 10 years of diligent work at Acme Engineering, he retired and became an avid gardener and skilled woodworker. Ronald also kept a very manicured and immaculate lawn, which was admired by anyone who saw it. He loved nature and had a special love of birds. He was a lifelong learner and seemed to have an innate ability to fix anything that was broken. Ronald will be missed by all who knew and loved him. In lieu of flowers the family requests donations to: John 3:16 Mission at: 575 N. 39th W. Ave Tulsa, OK 74127 or www.john316mission.org Ron is survived by his wife, Susan, of the home in Broken Arrow Daughter, Mary Suzanne Breedlove of Tulsa Son, Josef Allen Schrader and his wife, Stephanie of Tulsa Son, Daniel Thomas Schrader of Tulsa Daughter, Kristine Erica Schrader of Tulsa Daughter, Molly Rebekah Wolter of Tulsa Sister, Kathy Downs of Shelby Township, Michigan Sister, Lavern Koczot of Spotsylvania, Virginia 9 Grandchildren: Korina Elizabeth, Christopher Allen, Katelyn Elizabeth, Makena Nicole, Tyler James, Cooper Allen, Madeline Elizabeth, Lucas Gregory, and Jayden Daniel 3 Great Grandchildren: Elijah James, Kimberlin Grace and Emma Marie He was preceded in death by his parents and one sister, Delphine Liske

Ronald Joseph Schrader was born on Wednesday, November 6, 1935 in Hamtramck, Michigan to Adolph and Veronica (Klimek) Schrader. He passed from this life into the arms of his loving Savior on Sunday, April 25, 2021 in his home in Broken Arrow,... View Obituary & Service Information

Send flowers to the Schrader family.