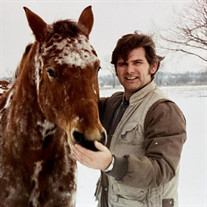 Robert Joel Necessary, Jr. ​Funeral services for Robert Joel Necessary, Jr. have been scheduled for 1:00 PM, Tuesday, May 19, 2020 at the Hayhurst Funeral Home Chapel in Broken Arrow, Oklahoma. Burial will follow at Park Grove Cemetery in Broken Arrow, Oklahoma under the direction of Hayhurst Funeral Home. ​Robert Joel Necessary, Jr. was born on Monday, February 26, 1945 in Foley, Alabama, the son of Robert and Lorene (Turnbo) Necessary, Sr. He died at his home in Porter, Oklahoma on Monday, May 13, 2020. He was 75 years of age. ​Robert attended Bixby public school and received an Associate’s degree from Rogers State College in Claremore, Oklahoma. He was married to the former Miss Joann Arnold on January 17, 1964. They had lived in Broken Arrow, Bixby and Porter. Joann preceded him in death on August 5, 2010. Robert was an Aircraft Mechanic for McDonald Douglas, Nordam and Spirit Aviation. He enjoyed Horses, Old Cars, Fishing and Playing Cards and Domino with his family and friends. His greatest love came from spending time with his daughter, grandchild, and great-grandchildren. The family requests memorials to the American Cancer Society, 7645 East 63rd Street, Suite 105, Tulsa, OK 74133. ​He is survived by, Daughter,​​Gloria and husband Wayne James, Porter, OK Granddaughter,​Shaila and husband Will Jones, Tulsa, OK Great-Grandchildren,​Emily, Logan and Jax ​He was preceded in death by, his parents, Robert and Lorene, wife, Joann, Brother, Charles “Neal” and a sister, Elizabeth. Services will be streamed live 1 pm, Tuesday, May 19th at https://vimeo.com/418562931

Send flowers to the Necessary family.