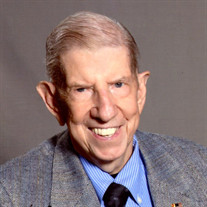 Robert “Bob” Fulton was born on December 17, 1922, outside of Titusville, Pennsylvania to Robert Sr and Blanche Susan Fulton. He had two older brothers, Ivan and Charles, two younger brothers, Jackie and Thomas “Skippy”, an older sister, Ruth “Pat” who all have preceded him in death. He has one younger sister Shirley, who lives in Muskogee, Oklahoma. Robert’s wife, Arleeta, and older son John David also preceded him in death several years ago. Robert is survived by his younger son, Robert III (Cheryl) three grandchildren, Joshua (Kasha), Kathryn (Patrick) and Alison along with two great-grandsons, Hayden and Brennan and his fiancee' Rose Corey. Robert moved at the age of 6 with his parents and siblings from Titusville, PA to eastern Oklahoma. In those early years, they lived in Fort Gibson, Gore and Webbers Falls, OK. His father followed work opportunities as an electrician across the oil fields of Oklahoma, leading the family to Guthrie and then back to the Muskogee area. He loved to tell stories of working with his father laying electrical systems for dams, schools, and commercial buildings. He struggled with school but at his mother’s insistence finished his high school education. He went on to earn a Bachelor’s Degree from Oklahoma City University. He then struck out to learn a machinist’s trade in Seattle, WA with several friends from Oklahoma, all looking to find work. World War II drew him and two of his brothers into the military, into what he frequently commented on as being one of the greatest honors of his life. Serving in a U.S. Army ordinance support unit in Europe and the Pacific, Robert was eventually assigned to a unit in post-war Japan outside of Osaka. Following the war, Robert began a career with the Veterans Administration as an X-Ray technician. His career in X-Ray technology began in the late 1940’s in Muskogee, Oklahoma and moved to several positions in Tulsa, OK and Wichita, KS. He spent almost 10 years at Baptist Hospital in Oklahoma City as Chief X-Ray Technician and was in charge of a technician training program as well as the start of new radiation therapy treatment programs. He finished his career at Saint Francis Hospital in Tulsa, OK retiring with almost 50 years in the field of x-ray technology. He spent many years and had many friends in the local Wood Workers and Wood-Turners organizations and was known for his wood turning projects. Robert was a long-time member of Heritage United Methodist Church in Broken Arrow, OK where he had a number of very good friends. In lieu of flowers donations to the American Cancer Society would be appreciated.

The family of Robert Fulton, Jr. created this Life Tributes page to make it easy to share your memories.

Send flowers to the Fulton, family.