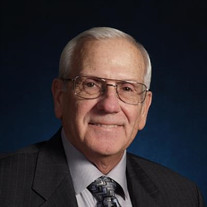 A memorial service honoring Francis Richard “Rick” Ellis II will be 10:00 a.m., Wednesday, February 19, 2020 at Southwood Bible Church, Tulsa, Oklahoma. Francis Richard “Rick” Ellis II was born on Thursday, August 2, 1945 in Tulsa, Oklahoma, the son of Francis Richard Sr. and Mary E. (Beard) Ellis. He died on Saturday, February 15, 2020 in Tulsa, Oklahoma. He was 74 years of age. In 1972 Rick graduated from the University of Tulsa with a Bachelor’s degree in Finance. worked as a real estate appraiser. He married the former Miss Billie Jean Jones on September 25, 1972 in Tulsa, Oklahoma. Rick was a wonderful husband and father. He was a member of Southwood Bible Church since 1972. Rick was a private pilot for 40 years and loved to fly both his P-51 and Fisher Tail Dragger airplanes. He also enjoyed sailing and he was a member of the Kit Car Club of Oklahoma and the Tulsa Chevy Classics Car Club. He was also a member of two flying clubs. Rick had a love for antique cars including his 1934 Frazier Nash Automobile and a 1952 Chevy Truck, both fully restored. Rick is survived by, Wife, Billie Jean Ellis, Broken Arrow, OK Children, Rich Ellis and Cass, Broken Arrow, OK Richelle Ward and Larry, Bixby, OK Grandchildren, Caitlyn Ellis, Broken Arrow, OK Ashlyn and Cayden Ward, Bixby, OK Sister, Cheri Ary and David, Denver, CO Several nieces, nephews and many members of his church family Rick was preceded in death by his parents.

The family of Rick Ellis created this Life Tributes page to make it easy to share your memories.

Send flowers to the Ellis family.