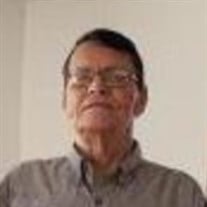 Richard “Rick” Earl Stickney was born in Broken Arrow, Oklahoma on Sunday, July 2, 1944 to John and Martha (Thompson) Stickney. He traveled to his eternal destination on Tuesday, April 27, 2021 from his home in Tulsa, Oklahoma. He was 76 years of age. The family will hold a private family service. Rick was a hometown Broken Arrow boy. His Step-Father, Arthur Fowler was his father figure and instrumental in raising him. Rick attended Broken Arrow Public Schools and was a Veteran of the United States Air Force. After he was discharged, he met and married the sweet, Alicia Hambrick, from Comanche, Oklahoma. They married on March 5, 1966 in Wichita Falls, Texas and celebrated 55 years on their last anniversary. Rick was an avid baseball fan. When it came to professional baseball teams he cheered for the New York Yankees. Truly, his two favorite teams were the Cougars and the TC Rebels. His son Jim, played for the Cougars. Rick and both sons, Richard and Jim Allen, coached the TC Rebels, the team his grandson played for. He coached youth baseball in Broken Arrow for many years. He was known endearingly as “G-Pop” in the baseball community. One of his favorite pastimes was going to the grandkids activities and cheering them on. He loved his chihuahua’s and dachshund’s - they were part of the family. Rick is survived by, Wife, Alicia Stickney of Tulsa, Oklahoma Sons, Richard Stickney and Starr of Bixby, Oklahoma Jim Allen Stickney of Broken Arrow, Oklahoma Grandchildren, Branson Stickney, Pryce Stickney, Kaelyn Stickney Brother, Kenny Fowler of Nowata, Oklahoma Sister, Barbara Lawson of Broken Arrow, Oklahoma Preceded in death by parents, sister, Diane Watson

Richard &#8220;Rick&#8221; Earl Stickney was born in Broken Arrow, Oklahoma on Sunday, July 2, 1944 to John and Martha (Thompson) Stickney. He traveled to his eternal destination on Tuesday, April 27, 2021 from his home in Tulsa, Oklahoma.... View Obituary & Service Information

The family of Richard Stickney created this Life Tributes page to make it easy to share your memories.

Send flowers to the Stickney family.