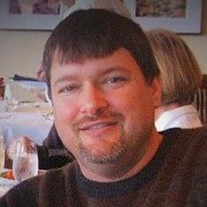 Richard Robert Gasper, son of Richard A (Rich) and Winifred J. (Winnie) Gasper (Russell) was born on December 18, 1966 in Lakewood, Ohio. On January 7, 2021 he crossed over to Heaven in Scottsdale, AZ. Rich was a 1985 graduate of Broken Arrow High School. He completed two years at Tulsa Vo Tech where he later taught adult education and video animation classes. He married the love of his life, Lori Ann Myers from Pelahatchie, MS on October 20, 2001 and shortly thereafter relocated to Phoenix/Scottsdale Arizona. Rich’s childhood and youth activities included Cub Scouts, Boy Scouts, and Civil Air Patrol and was a member of Pride of Broken Arrow Marching Band At the age of twelve, Richard accepted Jesus Christ as his Lord and Savior. Throughout his life; his Love for the Lord was evident through acts of service including reaching out to others, homeless ministry, children’s ministry, and all practical needs of the church. No service task was beneath his ability or his desire to serve and fulfill. Richard was very gifted in computer, technology, and infrastructure. In his early years, he started a computer and networking business in Tulsa. Rich’s current role was a Chief Engineer of Development where he developed technology for the entertainment industry. Rich’s humility surpassed his genius abilities. He was a teacher, visionary, a brilliant programmer, and algorithmic problem solver. He created and developed various encryption and security programs. Richard is survived by his wife Lori Gasper of Scottsdale, AZ, daughter Megan Hall and husband John Hall of Vinita, OK, his mother Winnie Gasper of Edmond, OK brother, Kenneth Gasper of Edmond, Ok, sister-in Law Susan Martin (Frank) of Pelahatchie, MS brother-in-law Jeffrey Myers (Kathy) of Pelahatchie, MS and brother-in-law Rodney Myers of Jackson, MS. He is also survived by five nieces, seven nephews, two great nieces and two great nephews. He was preceded in death by his father Richard Andrew Gasper and his brother Jeffrey M. Gasper, and his in-laws Russell and Gloria Myers.

Richard Robert Gasper, son of Richard A (Rich) and Winifred J. (Winnie) Gasper (Russell) was born on December 18, 1966 in Lakewood, Ohio. On January 7, 2021 he crossed over to Heaven in Scottsdale, AZ. Rich was a 1985 graduate of Broken... View Obituary & Service Information

Send flowers to the Gasper family.