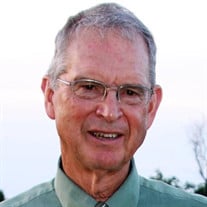 Richard Cotner was born on Monday, December 27, 1943 in Tulsa, Oklahoma to Carrell and Lucille (West) Cotner. He passed from this life to his eternal home in Heaven on Thursday, August 19, 2021 from Broken Arrow, Oklahoma surrounded by his family at the age of 77. Richard grew up in the tree nursery business, Cotner Nursery, in Tulsa. He graduated from Edison High School in 1961 and from Okmulgee Tech in 1964. He married his high school sweetheart, Linda Mark on June 5, 1964. They were married 57 years, 2 months and 14 days. They were blessed with three sons, Mark Cotner, Mike Cotner and Kevin Cotner. He taught industrial electronic classes at Tulsa Technology Center for 30 years and retired in 2018 as an industrial training coordinator. He was active in the Gideons, International and enjoyed passing out Bibles and giving Gideon reports at various churches. He also attended several International Gideon Conventions with his wife and family. He was active in his church, County Line Baptist in Broken Arrow. He never met a stranger and enjoyed traveling all over the United States, especially the western states. He enjoyed camping, hiking and visiting museums and national parks. He spent as much time as he could with his grandchildren, Rick Cotner and Katee, Danielle Oakley and David, Austin & Ashley Cotner, Connor Cotner and Hallie, Elise and Dakota Cotner, Faith Cotner & Jessica Wright and his great-grandchildren, Carter Cotner, Abigail Cotner, Callie Rae Oakley, Luna Cotner, Michael Wright and Millie Wright. He was a ham radio operator for many years starting in high school and introduced his hobby to his boys and grandchildren. He enjoyed gardening and planting trees on his land east of Broken Arrow. He enjoyed visiting with friends and family. He had lots of energy and liked to keep busy as much as possible. He and his wife enjoyed bicycle riding for most of their married lives. He is survived by his wife, Linda; his three sons - Mark (Tami), Mike (Heather), Kevin (Crystal); two sisters, Sue Birdsong and Linda Merkle (Jerry); 9 grandchildren, 6 great-grandchildren, multiple nieces and nephews and cousins. He was preceded in death by parents, Carrell and Lucille Cotner, his brother, Jim Cotner, nephew Jason Cotner; nephew Brent Birdsong, and his brother-in-law, Ardon Birdsong; nephew Mark Eldridge and brother-in-law, Richard Eldridge. In lieu of flowers, a donation to either The Gideons International or The Baptist Children Home in Owasso is suggested by the family

Richard Cotner was born on Monday, December 27, 1943 in Tulsa, Oklahoma to Carrell and Lucille (West) Cotner. He passed from this life to his eternal home in Heaven on Thursday, August 19, 2021 from Broken Arrow, Oklahoma surrounded by his... View Obituary & Service Information

Send flowers to the Cotner family.