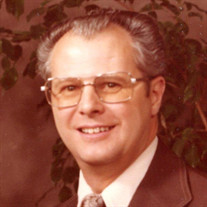 Services will be streamed live 2 pm, Wednesday, April 22, 2020 at https://vimeo.com/409002991 Rex L. Speedy, 83, of Broken Arrow traveled to his final journey from this earth to heaven on Friday, April 17, 2020. As his loving wife, Nelda, held his hand, he took his last breath and departed. Rex was born in Bradford, Pennsylvania, the first of four sons to Ben and Mary (Patterson) Speedy. He was a member of Northern Star Masonic Lodge 555 and a 32⁰ Scottish Rite Mason in Pennsylvania. Rex graduated from Otto High School in 1954. After graduation, he attended Williamsport Technical School where he studied diesel mechanics. While he was attending Tech, a company, Clark Bros. of Olean, NY recruited him to work while finishing school to finish his associates degree in diesel mechanics. Rex continued to work at Clark Bros. until he received his draft notice from the Army. Rex was inducted into the Army April 5, 1960. After basic training at Fort Knox, he was ordered to receive armor training on tanks. He learned to shoot 30 and 50 caliber machine guns and 90 mm tank guns. He was an excellent marksman. He was later transferred to Fort Benning, Georgia where he served as diesel mechanic over the ordinance jeeps. Afterwards, Rex transferred to HQ Cavpar 5th Cav. Of the 1st Cav. Division up near the DMZ in South Korea in the mechanic motor pool where he spent 1 yr., 2 mo., 5 days. After his honorable discharge from the Army, he returned to civilian life. He had his job with Clark Bros. waiting for him and returned to work. Clark Bros. had been sold to Dresser and when they bought Ingersoll Rand became Dresser Rand where he retired with 36 years as a service representative. From Olean he was transferred to the Tulsa office and was then relocated to Pampa, Texas to replace a retiree for the Midwest areas. While getting settled in the area and living in the hotel, he met the love of his life, Nelda. She was a cute, sweet, sassy lady that caught his eye. They dated for a year and married April 6, 1963. They were married for 58 years and 11 days. Although Rex traveled from job site to job site, each journey was a new adventure. He was highly thought of no matter which job he was on. His journey took him to many places all over the USA and to foreign countries like England, France, Australia, New Zealand, Argentina, Abu Daube, and South Korea. His all-time favorite place that he worked was Alaska on the North Slope. Rex, Nelda, and Debbie left Pampa and relocated once more to Tulsa in 1969. Rex continued his travels, going to exciting places to repair receptacle and centrifugal engines in new plants. He inspired the love of traveling in Nelda and Debbie. At times they joined him on his travels. Rex was excellent at woodworking and repairing motors and engines. He restored a 1964½ red Mustang when he was home. Sometimes it was a family affair working on the Mustang. He later built a life sized working windmill and an outhouse. This was for Nelda as she was raised on a farm and they planned these things out to build. They never took short cuts. He loved country music, especially Jim Reeves. He was also a Dallas Cowboys and OU Sooner football enthusiast. He enjoyed watching old time westerns with his family. He was always willing to help anyone. In 1998, he and Nelda decided to go on a vacation to Alaska. They decided to make it a family adventure of a lifetime. Rex wanted to share the place he so dearly loved with Debbie and Brittney. So, they took a 10-day cruise and went on a 7-day land tour that started in Fairbanks. Whale watching and landing on an iceberg was one of the highlights of their adventure. They met people from all over the world, most of which still stay in touch. Rex is preceded in death by his parents Ben and Mary Speedy, 2 brothers, and numerous other family. In laws Guy and Marguerite Blakemore and brother in law Dwaine. He is survived by the love of his life Nelda of the home, daughter Debbie and granddaughter Brittany, and their fur children Katy and Levi. Brother Jack Speedy and wife Karen of Carrollton, Ohio and their family Brian and Michelle of Easley, South Carolina along with their sons, Kim and Jonathan Stocker of Hudson, Ohio and their daughter Craig and Stephanie Speedy of Carrollton, Ohio. He is also survived by numerous cousins and friends. The family would like to thank the staff at Rivercross Hospice for all their support and caring for Rex during his last days. Special thanks to Caroline and Laura. Thank you for making Rex’s final days as peaceful as possible. Viewing will be from 12-5 pm, Tuesday, April 21 at Hayhurst Funeral Home. Services will be streamed live 2 pm, April 22, 2020 at https://vimeo.com/409002991. The family has asked that in lieu of flowers, donations be made to: - Northern Star Lodge# 555 c/o Mr. Gilbert Irons Jr. at PO Box 383, Port Allegany, PA 16743 - Ancient Accepted Scottish Rite, Pennsylvania Council of Deliberation at PO Box 2423, Harrisburg, PA 17105-2423 - Tulsa SPCA at 2910 Mohawk Blvd, Tulsa, OK 74110 Alzheimer Association at www.alz

Send flowers to the Speedy family.