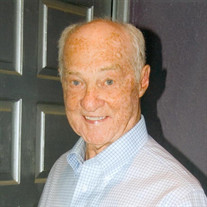 A private family-only Graveside Service will be held on Tuesday, April 21 at 2:00 PM at Rolston Cemetery in Bernice, Oklahoma near Grand Lake on Monkey Island. Ray was born to Elijah and Flora (Bell) Hunt on Wednesday, April 18, 1923 in Detroit, Michigan. He passed away on Sunday, April 19, 2020 in Tulsa, Oklahoma one day after his’ 97th Birthday. Ray grew up one of five children. After high school, he joined the U.S. Army where he served as an MP with the occupying forces in France during World War 2. After his service to his country was completed, he met and married Bettye Jean “B.J.” Moore. They became parents of four boys. Ray was a great athlete, playing baseball with a traveling team for the Army during his years of service, but also enjoyed golf, tennis, and dancing. He was a lover of both people and life with a great smile. Ray enjoyed creating good times and a sense of community wherever he went, most recently starting a Sunday evening social hour at his high-rise complex 2300 Riverside. He had a generous heart often giving to the homeless in Tulsa, and volunteering at the Los Angeles Food Bank when he lived there. He and his family relocated often as he rose quickly through the ranks of The Standard Oil Company (Ind.) resulting in his boys being exposed to different cities and regions of America. His high school education was augmented by attending the prestigious Harvard Advanced Management Program. He retired as President of the Santa Fe Pipeline companies, subsidiaries of Burlington Northern/Santa Fe railroads. After retirement, Ray and B.J. enjoyed spending time at their home, boating on Grand Lake, as well as spending some time each year at Sun Valley, Idaho until her passing. Ray continued to make those trips until recent years. Ray is survived by, Sons, Jeff Hunt, Michael “Buzz” Hunt, and Brian Hunt Grandsons, Jesse Raymond Hunt and Brett Robert Hunt and many friends in Tulsa, Detroit, Grand Lake, Sun Valley and others. Ray was preceded in death by his parents, his’ wife of 49 years, “B.J.”; a son, David Bradley “Brad” Hunt; 2 sisters, Janette and Rose and 2 brothers, Frank and Paul.

A private family-only Graveside Service will be held on Tuesday, April 21 at 2:00 PM at Rolston Cemetery in Bernice, Oklahoma near Grand Lake on Monkey Island. Ray was born to Elijah and Flora (Bell) Hunt on Wednesday, April 18, 1923 in Detroit,... View Obituary & Service Information

The family of Raymond Hunt created this Life Tributes page to make it easy to share your memories.

A private family-only Graveside Service will be held on Tuesday,...

Send flowers to the Hunt family.