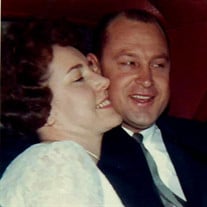 Raymond Clarence Corbitt was born on Friday, August 19, 1927 in Japton, Arkansas, to Clarence Eli and Julia Ella (Drake) Corbitt. There were 10 children in total. He passed peacefully from this life into his eternal home in heaven on Wednesday, January 27, 2021, at the age of 93, in Broken Arrow, Oklahoma surrounded by his loving family. Raymond’s father died at age thirty-seven, when Raymond was only ten years old. As a result, he had to grow up quickly. At the age of sixteen, he joined a migrant crew of grown men digging potatoes in Maine, he then followed them to Washington state for the apple harvest. From there, he moved to Fullerton, California while working in the shipyards, at Knotts Berry Farm, the Chrysler Motors plant, and the Hunt’s cannery. At the age of 21, he broke an arm roller skating with some friends. Someone talked him into going back the next week, where he promptly broke the other arm. Not able to feed himself, he was forced to recover for 6 weeks in a nursing home. By far the youngest occupant, Raymond took a lot of good-natured ribbing from the much older residents. He stayed in California working until around the age of 30 when he, and his brother Hugh, moved to Tulsa to enroll in Tulsa Barber College. They graduated together in 1959. After graduation, he moved back home to Arkansas where he began his 55-year barbering career in Fayetteville. The first 5 years he barbered at City Barber Shop on Dickson Street and the remaining 50 years was spent at Oak Plaza Barber Shop, just North of the University of Arkansas. Raymond owned that shop for many years before retiring at age 86. He met a lot of people during that time and enjoyed talking about the Razorbacks. Raymond met Lois Tackett in Fayetteville, Arkansas in 1959 and four years later, they married on December 15, 1963. During their marriage they lived in Farmington, Elkins, and Elm Springs. He was the father of two sons and one daughter. His kids remember their dad as a hard worker, a good provider, a man who loved God, loved to hunt and fish, loved his country, and his Arkansas Razorbacks. Raymond was an avid beekeeper, liked to fox and coon hunt, always had pedigree hunting dogs, and loved attending church. He never met a stranger. His family enjoyed the funny things he said and the silly songs he wrote and sang. He will be missed by all who knew and loved him. Raymond is survived by: His wife, of 57 years, Lois of Springdale, Arkansas Son, Rev. John Napier (Rhonda) of Wesley, Arkansas Daughter, Melissa Beck (Rev. Todd) of Broken Arrow Son, Brad Corbitt (Audra) of Tontitown, Arkansas Brother, Hugh Corbitt (Norma) of Elm Springs, Arkansas Half-Brother, Don Burnett (Wanda) of Farmington, Arkansas Grandchildren: Hannah Westphal (Keith); Ashley Stricker (Ryan); David Beck; Tonya Rash (Tom) and Sheila Samuels (Leon) Great-Grandchildren: Elsie Westphal; Zoe Samuels; Nichole Williams (Matthew); Joshua Samuels (Bethany); Johnathan Pierce; Clayton (Abby) Pierce. Great-Great-Grandchildren: Clara Pierce; Erin Pierce; and Maggie Pierce He was preceded in death by his parents: Clarence Corbitt and Ella Corbitt Burnett; sisters: Zelma Watkins, Ruby Jane Selvey; brothers: Harvey Corbitt, Harold Corbitt, Carl Corbitt, Roy Burnett, and Jerry Burnett; and a great-grandson: Zachary Samuels In addition to those listed above, Raymond loves all his nieces and nephews, his many extended family members, and his multitude of friends. He will be greatly missed. Raymond will be buried in Drakes Creek Cemetery in Drakes Creek, Arkansas in a private family graveside service as soon as logistically possible. See service details at Westfield Chapel Funeral Home’s website in Springdale, Arkansas for graveside service date before sending flowers. The family will plan a celebration of his life later this spring when warmer weather and Covid vaccines are more readily available. Everyone is invited to attend at that time.

Raymond Clarence Corbitt was born on Friday, August 19, 1927 in Japton, Arkansas, to Clarence Eli and Julia Ella (Drake) Corbitt. There were 10 children in total. He passed peacefully from this life into his eternal home in heaven on Wednesday,... View Obituary & Service Information

The family of Raymond Corbitt created this Life Tributes page to make it easy to share your memories.

Send flowers to the Corbitt family.