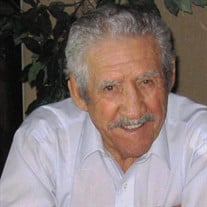 Raymond Isaac Bowline, of Broken Arrow, Oklahoma, passed away peacefully on November 26, 2020 at the age of 96 after a lifetime of more adventure, love, stories, and jokes than most people will ever know. Raymond was born on September 24,1924 in Qualls, Oklahoma. He and his brother, Tony, attended school at Wewoka, then transferred to Qualls. Raymond was the vice-president of his class his first year of high school at Tahlequah. His family moved to Broken Arrow, where Raymond graduated high school. Shortly after graduating high school, Raymond enlisted in the United States Navy to fight for his country in World War II. In the Navy Armed Guard, Raymond survived missile attacks from German submarines, weathered a hurricane, and crossed hostile waters in the South Pacific. He was in Liverpool during the D-Day invasion and his last mission took him to Hawaii through the Panama Canal. Raymond was proud of his service and of his country his entire life, celebrating his last Veterans Day with donuts and calls from his family. Raymond returned from the war to start what he called his “good life.” In 1946, Raymond married the love of his life, Wilma Christine (Billie). Through seventy-four years of marriage they built a life and legacy that endures though loving children, grandchildren, great-grandchildren, and countless friends. Raymond and Billie moved to Broken Arrow and started a dairy. They had two sons, Mike and Steve. Raymond became involved in the construction business and started Bowline Construction, a business that Mike and Steve continued together after Raymond’s retirement. Raymond began his hobby of horse racing with an orphaned colt he named “Beep Beep Wang,” which soon became a full-time job. He made many friends in the business and had many stories to tell. Raymond loved a good joke more than anyone. He delighted in the (usually) good-humored teasing of his children, grandchildren, and great-grandchildren. He never met a stranger and asked all the questions that no one else dared to ask. Raymond was caring and generous, checking in on family and friends even in his last days to make sure that they were all doing ok. Raymond loved cards and the casino. He shared this by teaching his great-grandchildren card tricks and Blackjack. Raymond spent his fair share of time in Las Vegas, and later at the Hard Rock Casino near his home, where he was dealt a royal flush and won a jacket that he often wore. He continued to play Blackjack with the help of dealers when he could no longer read the cards. You could always talk to him about a horse race and the favorites or a football game and the odds. Billie often did better than he did on their bets. He loved fishing and Grand Lake, where he and Billie owned a home. He had many adventures with broken boats, towing, and fishing. He loved fishing with his sons, his granddaughters, and great-granddaughters, teaching them how to catch (and eat) catfish and crappie. Raymond loved horses, his property in Broken Arrow, and being outside. Whether he was working on his tractor, mowing the pasture, or checking on horses boarded at his property even in his later years, Raymond was at home outdoors. Raymond lit up the room with his smile and his stories. No family gathering was ever dull with him. He loved good food and family, and he especially loved seeing his whole family together on Christmas Eve – a tradition that he and Billie continued to host until his passing. Raymond loved his family and was so proud of their accomplishments, especially his sons Mike and Steve. He loved Billie deeply, and she cared for him through seventy-four years of marriage until his last days. Raymond will be loved and missed by so many, especially his wife Billie; his son Mikes and Steve; his daughters-in-law Beverly and Patricia; his granddaughters Ashley, Courtney, and Kelli; his great-grandchildren Kasey, Madison, Mikayla, Ridley, and Samantha; his nephew Charles and his niece Gail; and all the friends he has met along the way. Raymond has joined his mother and father, Lihue Columbus Bowline and Era Jewel Bowline, his brother Tony Bowline, his son David Lee, his granddaughter Kim Bowline, and so many friends who have predeceased him. Due to current circumstances, a memorial service will be planned at a later date. Hayhurst Funeral Home in Broken Arrow, hayhurstfuneralhome.com, is handling the arrangements.

Raymond Isaac Bowline, of Broken Arrow, Oklahoma, passed away peacefully on November 26, 2020 at the age of 96 after a lifetime of more adventure, love, stories, and jokes than most people will ever know. Raymond was born on September 24,1924... View Obituary & Service Information

The family of Raymond Bowline created this Life Tributes page to make it easy to share your memories.

Send flowers to the Bowline family.