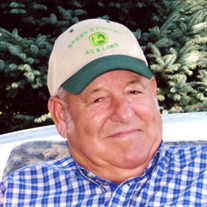 Ray Gerald Medlock was born in Broken Arrow, Oklahoma on June 9, 1935 to Callie and Neoma (Duensing) Medlock. He passed from this life to his eternal home in heaven on Wednesday, February 2, 2022 in Broken Arrow, Oklahoma. Ray attended Broken Arrow Public schools and was one of five children born to the Medlock family. He was the last surviving sibling. He met the love of his life, Naomi, in 1961 and married her on July 14, 1961. Their love story created two children together, Jerry and Sherry. Naomi passed on before Ray in February of 2013. He was a great Dad who loved his family, grandchildren and the great-grand babies. Ray worked for several companies, including Copper, Standard, McMichael, Keck and APAC. He was a heavy equipment operator and was a member of Local 627 Union for over 50 years. Ray helped build McClellan-Kerr navigational channel, numerous highways including highway 51 from Broken Arrow to Tulsa and the Indian Nation Turnpike. He also helped on several hospitals in Tulsa and around Oklahoma. Hobbies that Ray enjoyed included hunting, fishing and gardening. Ray is survived by, Son, Jerry Medlock and wife, Cynthia. Daughter, Sherry Medlock Wolfe and partner, John Kinzey. Grandchildren; Christy Holmes, Ashley and husband, Will Whitfield, Felicia Lacy, Cody and Ashley Wolfe, Clayton and Bonnie Wolfe. Eight great grandchildren. He was preceded in death by his parents, Callie and Neoma Medlock, brothers, Carl, Marvin and Troy and his sister, Thelma Mann.

Send flowers to the Medlock family.