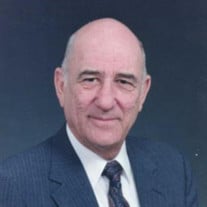 A mass of Christian burial for Raphael P. Landreville will be 1:00 p.m., Saturday, March 14, 2020 at St. Anne Catholic Church. Ray was born in Hermansville, Michigan on Saturday, June 23, 1928 to Hector and Katherine (Maves) Landreville. Ray passed away in Tulsa, Oklahoma on Tuesday, March 10, 2020 at the age of 91. Ray was married to Alexa Tyce for 50 blessed years and they had two children. Ray was a wonderful husband, father and grandfather. He adored his family and loved spending time with them. Ray was ordained a Catholic Priest on June 5, 1955. He served in the Diocese of Marquette, Michigan for six years. He entered the U.S. Navy as a Catholic Chaplain where he served for eight years, spending four years with the U.S. Marines and four years with the U.S. Naval Air. Following his tour in the Navy, Ray worked in the federal government as an investigator and voluntary compliance officer with the EEOC and as the District Director U.S. Department of Labor for the OFCCP. In 1990 he left the government to form his own company, RPL Management Resources, Inc. The company was dedicated to assisting government contractors comply with their EEO and Affirmative Action obligations. Ray was an active member of the Tulsa community and a participant in various parish activities. He founded the Tulsa Equal Employment Opportunity Coordinators Association (TEEOCA) and was an original member of the Oklahoma Ethnics Consortium, Tulsa branch and was an advisor to the Tulsa Speech and Hearing Association. Ray was an auxiliary professor of Law at the Langston University, Tulsa, Oklahoma for 15 years. Ray is survived by, Wife, Alexa Landreville, Children, Alexa Landreville, Seminole, FL Jason Landreville and wife Stephanie, Grandchildren, Shannon, Rachael and Nicholas Sister, Patricia Landreville, Camas, WA Ray was preceded in death by his parents, three brothers and four sisters.

The family of Ray Landreville created this Life Tributes page to make it easy to share your memories.

A mass of Christian burial for Raphael P. Landreville will be...

Send flowers to the Landreville family.