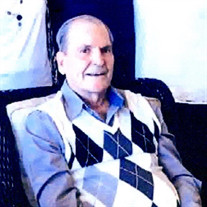 Private family services will be held. Ralph Jordan Elliott, son of Elmer and Edna Elliott, was born Sunday, May 31, 1925 in Oklahoma City, Oklahoma, and left our world on Tuesday, January 19, 2021 in Tulsa, Oklahoma at the age of 95. Services for Ralph are under the direction of Hayhurst Funeral Home. Ralph met “the love of his life,” Lenora Geasland, whom he married on March 19, 1944 in Okmulgee, Oklahoma just prior to shipping out with the Army during World War II. Ralph served in France, Belgium, and Germany, and survived the Battle of the Bulge before returning home in 1946. Joining the International Brotherhood of Electrical Workers (IBEW), Ralph became an electrician and taught electrical code for many years. After his children were grown, Ralph started his own company, Elliott Precision Products, a manufacturer of precision machined metal and a metal fabrication business. His formal education had stopped prior to high school, but he became a self-taught man, studying many topics such as trigonometry so he could figure out the properties of metal. He loved to read and learn, becoming adept at computer coding for his business. He and Lenora raised their family of three children, and eventually had seven grandchildren, and nine great-grandchildren. After he retired, Ralph enjoyed watching sports on television, and kept his mind working by writing code for his computers. Ralph and Lenora were married for 77 years. He will be missed. Ralph is survived by: Wife: Lenora Elliott of Broken Arrow, Daughters: Marilyn DallaRosa and Ray of Broken Arrow, Oklahoma; and Patricia Collins and Dick of Broken Arrow, Oklahoma Son: Steven Elliott and Jodi of Sedona, Arizona Grandchildren: Jeff DallaRosa and Stacie, Jennifer Freeman and Mike, Bryan Collins and Christine, Darin Collins and Febe, Deanna Sloan, Amanda Neeriemer, Natalie Nelson and Ryan Great-Grandchildren: Autumn DallaRosa, Aaron DallaRosa, Devin Freeman, Trevor Freeman, Sebastian Neeriemer, Lorelai Neeriemer, Evan Quintanilla, Kate Nelson, and Kinsey Nelson Sister: Dorothy Ralph was preceded in death by his parents, Norma (sister), Jean (sister), David (brother), and Shirley (sister).

Private family services will be held. Ralph Jordan Elliott, son of Elmer and Edna Elliott, was born Sunday, May 31, 1925 in Oklahoma City, Oklahoma, and left our world on Tuesday, January 19, 2021 in Tulsa, Oklahoma at the age of 95. Services... View Obituary & Service Information

The family of Ralph Elliott created this Life Tributes page to make it easy to share your memories.

Private family services will be held.

Send flowers to the Elliott family.