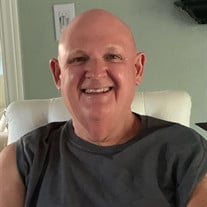 Philip William Yager was born in Jenks, Oklahoma on December 29, 1960 to Ernest and Frances (Ward) Yager. He passed on August 3, 2021 in Tulsa, Oklahoma at the age of 60. Celebration of Life is scheduled for 10:00 am on August 28th at BattleCreek South Tulsa campus located at 8855 E 91st St, Tulsa, OK 74133. Philip was known by all as Phil. Growing up he attended church at Evangelistic Temple with his family. He was a Jenks High School graduate of 1979. He furthered his education at OSU IT and obtained an Associate’s Degree. He met the former Sherry Strifler and they married in Broken Arrow, Oklahoma on February 2, 2020. Phil was a Commercial Inspector by trade for the City of Broken Arrow. Phil served for 32 years on the Broken Arrow Reserve Police Dept with much of that time as the commander of the Reserves. Phil had a servant’s heart and loved to help others in his role as a husband, father, papa, uncle, and police officer. Phil was very knowledgeable about guns and had a great collection. He was an outdoorsman with a love for being outside in God’s Country. His favorite pastimes were hunting and fishing. He loved to go to the cabin in Cookson and fry those fish he caught. He enjoyed sharing his talent for grilling and teaching others his ‘secrets of grilling’. Phil will be greatly missed by family, friends, co-workers, many cousins, and his Brothers and Sisters behind the badge. In lieu of flowers the family has set up an account to donate to Soldiers Wish and the BAPD School Resource Officer Fund. Please make payable and mail checks to the name and address below: Regent Bank c/o “Mike Baxter/ Philip Yager Memorial Fund” 7136 S Yale Ave #100 Tulsa, OK 74136 He is survived by, Wife, Sherry Yager of Broken Arrow, Oklahoma Sons, Cameron Yager and Lauryn Moreton of Broken Arrow, Oklahoma Joshua Yager of Oklahoma City, Oklahoma Mike Baxter and wife Lindsey of Broken Arrow, Oklahoma Grandchildren, Kami Jo Baxter and Jubilee Baxter, Colt Wilson and Hawke Wilson Sister, Cecilia Yager Niece, Lily Yager Aunts and Uncle, Rev. Everett Ward and wife Carolyn Ward of Springdale, Missouri Jack and Frankie Shiflett of Cambridge, Indiana Carolyn Pierce of Straughn, Indiana And Numerous cousins Preceded in death by parents.

Philip William Yager was born in Jenks, Oklahoma on December 29, 1960 to Ernest and Frances (Ward) Yager. He passed on August 3, 2021 in Tulsa, Oklahoma at the age of 60. Celebration of Life is scheduled for 10:00 am on August 28th at BattleCreek... View Obituary & Service Information

The family of Phil Yager created this Life Tributes page to make it easy to share your memories.

Philip William Yager was born in Jenks, Oklahoma on December...

Send flowers to the Yager family.