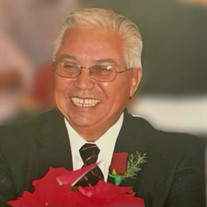 Pete L. Gonzales Pete L. Gonzales was born in Anson, Texas to Paul and Clara Gonzales on October 23, 1945. His heavenly departure happened on Thursday, December 17, 2020 in Tulsa, Oklahoma. Funeral services are under the direction of Hayhurst Funeral Home. Pete met Janie Galvan in his younger years in Plainview, Texas, and were married on April 24, 1965. Happily married for 55 years and together for 58 years, together they had seven children, fourteen grandchildren and 5 great-grandchildren. Pete was the family pillar and patriarch, a great husband, a loving father, and a devoted follower of Jesus. As much as he loved his family, he was deeply loved, and respected by many. Pete believed that actions spoke louder than words and many who knew him saw what it was to be a great husband to his wife, a great father to his children, and how to give to others. Pete was a godly man with very strong faith, unwavering faith, always seeing the good in a person. His Love for the Lord was infectious. He was a humble man who enjoyed serving his family and took great joy in giving and offering a helping hand. Pete also had a great sense humor, dry humor, but humor that warmed peoples heart and would put a smile on your face. Pete retired with Tulsa County after 24 years of service and added to the safety in our community. One of the many things he enjoyed was spending time with his family, he enjoyed watching a good Western movie or following his favorites football teams, Oklahoma State Cowboys and the Dallas Cowboys. Pete leaves this world leaving a legacy that will carry on for generations to come and a tremendous impact on the people’s lives he encountered. Pete is survived by, Wife, Janie Gonzales Daughters, Sandy Thoma and Brian; Debbie Meyer and Chet; Linda Thompson and Jack; Son, Paul Gonzales; Daughter, Tricia Price and Mike; Son, David Gonzales and Summer. Grandchildren, Parris, Sidney and Nick Thoma, Kaylee and Blake Meyer, Lindsey Shackleton and Sean, Ryan Thompson and Tayler Huerta, Bailey Parke and Luke, Baylee Williamson and Tate, Morgann Price, Ella, Evan and Easton Gonzales. Great-grandchildren, Emma, Callie, Ezekiel, Ezra and Greyson Siblings, Felix and Stella Gonzales, Fella and Lupe Hernandez, Pauline Gonzales, Lee Gonzales, Frances Gonzales, Mary and Jimmy Pacheco, Angie Tish, Sylvia and Roy Martinez. Preceded in death by parents, Paul and Clara Gonzales; eldest daughter Sandra Gonzales; two Sisters and One Brother.

Pete L. Gonzales Pete L. Gonzales was born in Anson, Texas to Paul and Clara Gonzales on October 23, 1945. His heavenly departure happened on Thursday, December 17, 2020 in Tulsa, Oklahoma. Funeral services are under the direction of Hayhurst... View Obituary & Service Information

Send flowers to the Gonzales family.