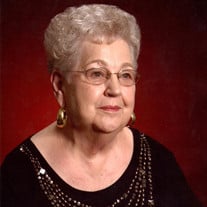 Pauline was born on Thursday, February 23, 1933 in Tulsa, Oklahoma to Claude and Elmo (Ealy) McCoy. She passed from this life to her eternal home in heaven on Friday, April 2, 2021 in Broken Arrow, Oklahoma at the age of 88. She was the second oldest of four children born to Claude and Elmo, and she always looked out for her baby brother, Wayne. Her father was a machinist, and her mother was a homemaker raising their four children. The family moved to Oklahoma City where Pauline attended school and graduated in 1951. One year after her graduation from high school she married Duward Tedder on January 9, 1952 and the two eventually became parents to two sons. She loved being a mom and worked hard after the marriage ended to provide for her sons, sometimes working two or even three jobs. Pauline’s career included secretarial work at OTASCO and in the Oil and Gas Department for the Bank of Oklahoma. She loved life and especially enjoyed travel after her retirement. She loved to fly. Trips to Hawaii and London, England topped her list of places she visited. She got a kick out of one of the “Bobbies” in London who called her “mum”. She was a great cook. Comfort food was her specialty as well as Thanksgiving Dinner for her family with all the trimmings, as well as other holiday gatherings. She loved hosting her family any time they could come for a visit. Pauline had a good sense of humor and enjoyed telling jokes. She also enjoyed sports of all kinds. She followed the Houston Astros and Rockets, St. Louis Cardinals, Oklahoma City Thunder, and the Oklahoma Sooners. She was an avid reader and kept up with current events. She was passionate about politics and helped run voting polls here in the Broken Arrow area. Words her family used to describe her are tough, caring, hardworking, fun, and friendly. She was active in Baptist churches in the Tulsa area and often volunteered to rock babies or work with toddlers in the nursery in the churches she was a member of. In her retirement years, she was active with the Senior Adult group at Arrow Heights Baptist Church in Broken Arrow. She will be missed by all who knew and loved her. Pauline is survived by: Son, Wayne Tedder, and his wife Mary of Broken Arrow Daughter-in-Law Gail Tedder of Broken Arrow Grandsons, David Tedder of Ft. Smith, Arkansas and Ryan Tedder of Chicago, Illinois Brother, Wayne McCoy of Mannford She was preceded in death by her parents Claude and Elmo McCoy, brothers Jack McCoy and Jim McCoy, Son Kenny Tedder

Pauline was born on Thursday, February 23, 1933 in Tulsa, Oklahoma to Claude and Elmo (Ealy) McCoy. She passed from this life to her eternal home in heaven on Friday, April 2, 2021 in Broken Arrow, Oklahoma at the age of 88. She was the second... View Obituary & Service Information

The family of Pauline Sexton created this Life Tributes page to make it easy to share your memories.

Send flowers to the Sexton family.