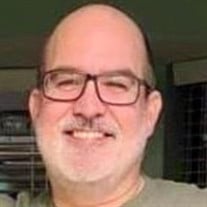 Kenneth “Paul” Burnett, Jr was born in Fort Walton Beach, Florida one of three children to Kenneth Paul “K.P.” Burnett and Diane (Horne) Leker. He left the tent of his earthly body and met Jesus face to face on Monday, October 19, 2020 at his home in Tulsa, OK surrounded by his family. Growing up in Destin, Florida, Paul enjoyed the beach and small-town life while being surrounded by many cousins, Aunts, Uncles and Grandparents. He graduated from Gulf Breeze High School, in Gulf Breeze, Florida. In 1995, he drove out to Oklahoma, knowing no one in the state, to attend Oral Roberts University, after committing his life to Christ only 6 months prior. His passion and hunger for more of God was contagious to all those around him. He earned his Bachelors in New Testament and his Masters in Biblical Literature while his focus was always on building relationships and serving those around him. He developed a passion for missions and served on trips to Nepal, Syria, Turkey, and Mexico. The missions department is where he met Erica Dorman. They married during their senior year, on October 18, 1998 in her hometown of Oakley, Kansas. After college, they moved to the east coast and called Centreville, VA home for the next 9 years. Paul served as youth pastor at Clear River Community Church and that community became a safe place to raise their growing family. In 2010 they moved back to Tulsa to be closer to family and reconnected with many friends. Paul had the ability to invite people into deep relationship. Whether it was his sense of humor or his vulnerability to share his own faults that drew them in, Paul was often a safe place for people to open up. When he joined the staff of Believers Church in 2016, his role as Facilities Manager was actually ministry in disguise. He was a deep thinker who connected with people and made it his mission to provide a well-maintained space where people could worship without distraction. Paul’s legacy is one of loving God, serving others and connecting with people. Paul is survived by: His wife, Erica, son Noah, daughter Grace and son Ethan, of the home Father, K.P. Burnett and his wife, Shelly of Santa Fe, Texas Mother, Diane Leker of Casselberry, Florida Sister, Tammy Burnett of Casselberry, Florida Many extended family members, and friends who feel like family. He was preceded in death by his sister, Kimberly Benore in 2016. Please email the Burnett family your stories and memories of Paul at [email protected]

The family of Paul Burnett created this Life Tributes page to make it easy to share your memories.

Send flowers to the Burnett family.