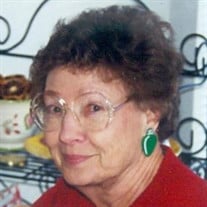 Patsy A Cundiff Patsy was born on October 7, 1928 in Okmulgee, Oklahoma to Mildred and Homer Wilson. She attended high school in Okmulgee and graduated in 1946. She attended the University of Missouri for 1.5 years and traveled to Saudi Arabia with her parents, for Homer’s job, and met the love of her life, Bob Gene Cundiff there. They were married in Beruit, Lebanon on January 1, 1950. Their first child, Bill, was born in 1951 in Daharan, Saudia Arabia. They moved to Muskogee, Oklahoma and their daughter, Carolyn, was born in 1953. In 1954 the family moved to Venezuela and lived there until 1960 when they returned to settle in Broken Arrow, Oklahoma. Pat was active in the Broken Arrow Rose Garden Club, Pilot Club and a member of the BA Methodist Church. She loved to play bridge and was a member of several bridge groups in BA. She and Bob loved to fish and traveled from Mexico to Alaska fishing. She left BA to move to Town Village Retirement home in Tulsa where she lived for 8 years and then Saint Simeon’s Assisted Living Center for 4 more years. Pat is survived by her son Bill and daughter-in-law Laura Cundiff, daughter Carolyn and son-in-law Mike O’Neal. Granddaughters Amy and her husband Mickey Buckmaster and Katie and husband Jeremy Wilburn, and grandson Keith Cundiff. Pat has 8 great-grandchildren; Libby, Kathryn, Molly, Will, Roxie Grace, Jacob, Roman and Harrison, and many nieces and nephews. She was preceded in death by her husband, Bob Gene Cundiff; father, Homer Wilson; mother, Mildred Wilson; brother, Homer Jr. (Sonny) and many very close friends including Doris Secrest, Tessie Wilson and Barbara Kimbrough of Broken Arrow. She passed at her daughter’s home in Sperry, OK under hospice care on October 24, 2020 surrounded by loved ones. Pat will never be forgotten by those who were fortunate to call her Wife, Mom, Grandma, Aunt or friend.

Patsy A Cundiff Patsy was born on October 7, 1928 in Okmulgee, Oklahoma to Mildred and Homer Wilson. She attended high school in Okmulgee and graduated in 1946. She attended the University of Missouri for 1.5 years and traveled to Saudi Arabia... View Obituary & Service Information

The family of Patsy Ann Cundiff created this Life Tributes page to make it easy to share your memories.

Send flowers to the Cundiff family.