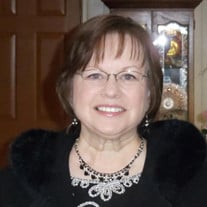 Patricia Ann Boudreaux was born on Saturday, December 6, 1947 in Eugene, Oregon to Albert Denton and Mae Ella (Hines) Hardison. She passed from this life into the arms of her Lord and Savior Jesus Christ after a fifteen-year battle with cancer on Thursday, February 18, 2021 surrounded by her family in Tulsa, Oklahoma at the age of 73. Known by Pat, she was the oldest of five children with three sisters and one brother. Her mother was a homemaker raising the children and her father managed a Safeway store for several years before opening Big Al’s Subs and Health Food Stores in Tulsa. Pat had a happy childhood and learned to play the clarinet. She played in the marching band at McClain High School in Tulsa where she graduated in 1965. She had a scholarship to play in the band at the University of Tulsa but marriage and the birth of her first child interrupted those plans. She never looked back, adding three more children to her growing family. Pat was the ultimate multi-tasker, raising her children, working at Big Al’s and then taking over the ownership of it after her father passed away in 1981, and involved in her kid’s school and sports activities. She always had a talent for being artistic: painting, ceramics, interior design, and making jewelry. She was a “rockhound” everywhere she traveled to. Her first marriage lasted nineteen years and resulted in four wonderful children. She met Phillip as their sons played on the same baseball team. She wanted to get better acquainted with him, so she convinced the coach to allow her to invite a few of the team members to a pizza party after one of the games. The whole team showed up. It cost her more than she planned on, but she did get to meet and spend time with Phillip, so it worked out the way she planned it in the long run. They have been happily married for the past 27 years! She and Phillip have enjoyed their lives together, traveling, going on three cruises, and being actively involved at Carbondale Assembly of God Church. Known by “Granny Pat” by her 14 grands and 5 great-grands, she loved spending time with each of them whenever she could. Her family described Pat as loving, caring, devoted, faithful, a jokester, artistic, a great example, strong work ethic, a battler, peacemaker, and one who persevered. She will truly be missed by all who knew and loved her. Pat is survived by: Husband, Phillip of their home in Tulsa Son, Lan Robinson (Stephanie) of Sapulpa Daughter, Denise Wilson (Rick) of Berryhill Son, John Robinson (Britton) of Oologah Son, Brad Robinson (Morgan) of Broken Arrow Stepson, Scott Boudreaux of Kansas City, Kansas Brother, Ronnie Hardison (Marlene) of Sapulpa Sister, Susie Ryder (Tom) of Bothel, Washington Sister, Sandy Kimball (Russ) of Augusta, Maine Sister, Linda Blackwell of Mannford Grandchildren: Elizabeth, Andrew, Rebecca, Megan, Riley, Skylar, Savannah, Luke, Blake, Catlyn, Brenna, Aaron, Cameron and Karissa Great-Grandchildren: Jacob, Brooklyn, Kennedy, Paisley and Bennett She was preceded in death by her parents, Albert and Mae Hardison and stepson, Chris Boudreaux

Patricia Ann Boudreaux was born on Saturday, December 6, 1947 in Eugene, Oregon to Albert Denton and Mae Ella (Hines) Hardison. She passed from this life into the arms of her Lord and Savior Jesus Christ after a fifteen-year battle with cancer... View Obituary & Service Information

Pat's service will be live streamed at https://boxcast.tv/view/memorial-for-pat-boudreaux-citigyg4dmn3xizqawdk

Send flowers to the Boudreaux family.