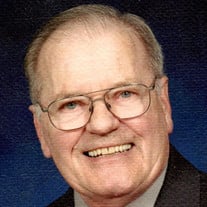 Delos (Pat) Patterson, Jr was born on Monday June 6, 1932 in Tulsa, Oklahoma, the only child of Delos Preston, Sr, and Lillian (Wright) Patterson. He passed from this life on Tuesday, June 16, 2020 in Tulsa, Oklahoma. He was 88 years of age. Pat grew up in Tulsa and attended school including Webster High School, where he graduated in the class of 1950. Soon after school, he enlisted in the United States Army where he held the rank of Sergeant as a paratrooper in the 82nd Airborne Division and served three years in the SHAPE headquarters in Paris, France working for numerous generals there. Following his time in the Army, he returned home where he met the love of his life, Marylin Vandervort through some mutual friends. He proposed marriage to her at Pennington’s Drive-In Restaurant on Peoria. They lived in Pryor while he worked for John Deer but after a few years moved back to Tulsa where they began their family. Broken Arrow became home to the family in 1961. Pat enjoyed playing golf, baseball, softball, and fishing. The family enjoyed many weekends at a cabin up at Grand Lake. He enjoyed all kinds of music, was a bit goofy, but always personable with a big unforgettable smile. Pat was the owner of Sooner Advertising Specialties here in Tulsa. He and Marylin have been members of the First Baptist Church of Broken Arrow for the past 20 years. He loved his Lord, his wife, his children, grandchildren, and great-grandchildren. He leaves a legacy for them to follow in his footsteps. Pat is survived by: Marylin, his wife of 63 years of the home Daughter: Kimberly Blackwell and husband Lonnie of Broken Arrow Daughter: Susan Graham and husband Billy of Broken Arrow Son: Gary Patterson and wife Jerri of Coweta 6 Grandchildren: Jason Spears and wife Stevie; Kendra Graham; Katie Graham; Alex Graham; Emily Patterson; and Anna Patterson. 5 Great-Grandchildren: Maxwell Spears, Madelyn Spears, Jillian Spears, Archer Spears, and Finley Spears. Pat was preceded in death by his parents: Delos Preston, Sr and Lillian Wright Patterson

Delos (Pat) Patterson, Jr was born on Monday June 6, 1932 in Tulsa, Oklahoma, the only child of Delos Preston, Sr, and Lillian (Wright) Patterson. He passed from this life on Tuesday, June 16, 2020 in Tulsa, Oklahoma. He was 88 years of age. Pat... View Obituary & Service Information

Send flowers to the Patterson family.